Lindsay suggested we “…get a hold of the fish people…” to get some feedback/advice.  Ron Kurowski put us in touch with Ben Heussner, Waukesha County Fisheries Biologist with the Wisconsin Department of Natural Resources.  Ben met us at the Scuppernong Springs on July 14th and reviewed our work and also described the Phase II effort to restore the Scuppernong River to its original bed, which his DNR team had just completed.

Here is a short video of the “Big Springs“, at the very start of the river, where we talked with Ben.  He is referring to the Trout Unlimited group and what great partners they have been.

Here is Ben showing us the shells he collected from the old riverbed (sorry about the rotated image).

In the early 1990’s Ron Kurowski and others from the DNR created a plan to repair the damage done to the  Scuppernong River from man-made dams, dikes and canals (this was a key component of the Scuppernong River Habitat Area Restoration Project).  The first step was to remove the dam that created “the pond” in the wetlands where numerous springs collected to form the Scuppernong River headwaters.  This was done in 1993 and Ben was there to set the river on its meandering course after the pond drained.

Phase 1 was completed in 2005 restoring 2+ miles of river to its original bed.  The river is healing quite well in this area except for a barrier between the river and one of the old canals that was blown out during the floods back in 2008.  Phase 2 included repairing this break and restoring the stretch of River from the end of Phase 1 to Hwy N.

Later that day I visited the Phase 2 work site.  If you want to check it out, I recommend parking along Hwy N, just North of Wilton Rd. where the River passes under the road and following the river upstream. The work site below is accessed via a DNR “road” off of Wilton Rd just East of Hwy N.

There was major work done here to fill a trench connecting the river to the canal system.  More details on that below. 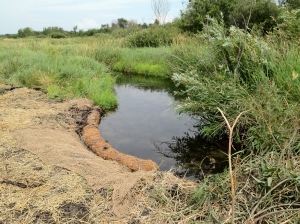 I followed the 2-track shown below upstream looking for the 2008 “blow-out” repair work.

Along the way you can see the old canal drying up now that the breach has been repaired. 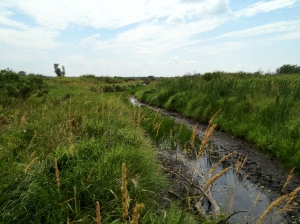 The scenery in this area is blissful… if you want some peace and quite, take this hike up the Scuppernong River.

After following the 2-track for approximately 1mile through dogwood and willow brush and open areas, I arrived at the repair site.  I imagine it was pretty tough to drive the machinery back there. The stretch below is the old connection where the river was diverted into the man-made canal.  Now it is filled in and the separation restored.

The view upstream from the repaired area.

Below is the edge of the fill blocking access to the old canal. 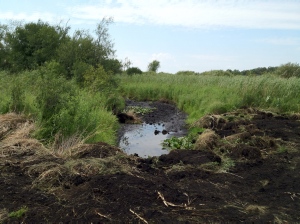 Below is where the breach in the river was repaired.

Returning back to the beginning of the Phase 2 work site, where another stretch of connecting trench between the river and the canal was filled in.

The picture below is taken from the old canal looking back at the river.  That was a long ditch to fill! 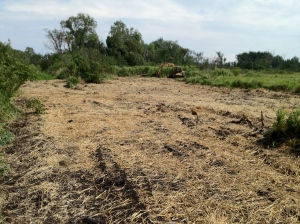 The next pictures show the rest of the Phase 2 effort from the main work site above going West to Hwy N.  Watch for the pool, riffle, run sequence Ben described.  Unfortunately, I don’t have any pictures from before the work was done or during the work in progress.

You can see how carefully, they “mucked out” the river-bed. 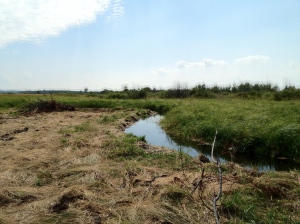 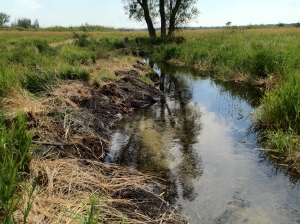 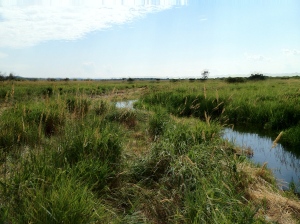 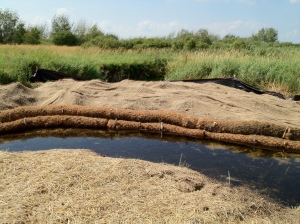 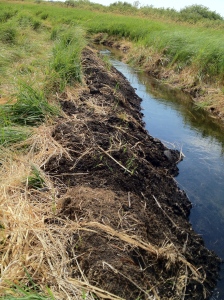 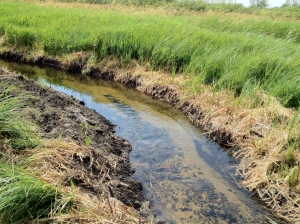 Ben explained that the gradient change was relatively small, so they had to work carefully and measure the depth frequently.  Checkout the “runs” below. 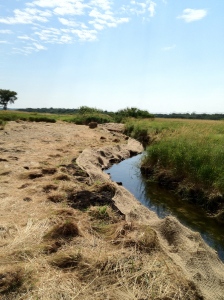 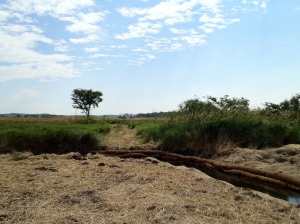 Thanks to Ben for meeting with us and explaining more about the Scuppernong River restoration effort.  Hats off the DNR crew that accomplished the excellent work shown above in extremely hot and challenging conditions!