The Scuppernong Springs Nature Trail passes through prairies, woodlands and wetlands making it a great place to see a wide variety of flora and fauna. I’ve often referred to the Native American Campsite (#6 on the map) as, the “sand prairie”, without knowing what a sand prairie really is. Which begs the question, what exactly am I trying to restore? What does restoration mean?  Here is a summary from John J. Ewel’s “Restoration is the ultimate test of ecological theory” in: Restoration Ecology, A Synthetic Approach to Ecological Research,1987:

Sustainability
Is the reconstructed community capable of perpetuating itself, or, like agricultural ecosystems and golf courses, can it be sustained only if managed by people?
Invasibility
Does the reconstruction yield a community that resists invasions by new species?  Intact, natural communities are, in general, less easily invaded than ones that have been damaged or ones that lack one or more of their key species.
Productivity
A restored community should be as productive as the original.
Nutrient retention
A reconstructed community that loses greater amounts of nutrients than the original is a defective imitation.
Biotic interactions
Reassembly of formerly associated plant populations often – but
not always – leads to reconstitution of the entire community. Animals and
microbes usually colonize spontaneously because of their mobility and ubiquity,
respectively.

These are concrete, comprehensive, challenging goals that I’m taking to heart and mind.

Per Finley’s Vegetation of Wisconsin in the Mid-1800s map, this area was comprised of oak openings and prairies, of which we have one of the rare, “imperiled” varieties, i.e. a sand prairie, right here at The Springs.  Last year we spent a lot of time there clearing scruffy red oak and cherry trees that had survived earlier mowing and burning, and doing a lot of piling and burning of our own.   This year we are attacking the weeds and I asked Ron Kurowski (retired DNR Naturalist) to come out and help me identify plants and strategize.  Last Thursday, July 18, despite the heat and humidity, Ron was his ebullient self and we spent hours under the hot sun identifying plants; it was a blast!

The big blue stem by the marl pit canal responded very well to the burn. 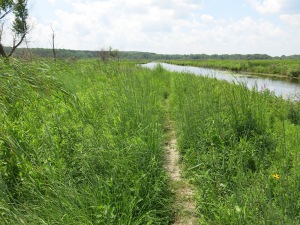 Liatris, aka Blazing Star, on the sand prairie. 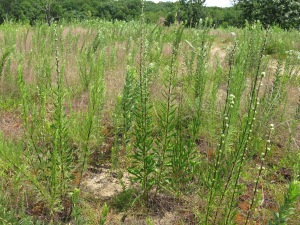 Before Ron arrived, I did a little brush cutting and spring cleaning in the area of the Hotel Springs. 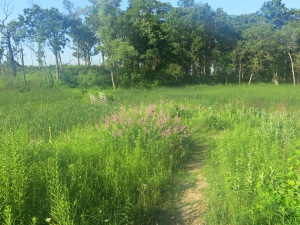 5 springs emerge from the hillside near the stone half circle that frames the main Hotel Spring and they had gotten overgrown with brush and water cress.  I also cleaned out the springs by the old barn site and the new spring, that just started flowing again this year, by the huge willow stumps. Take a look!

One of my main ecological considerations, and axiomatic to reaching the goals set by Mr. Ewel above, is to limit, and ultimately completely stop, using poison on the land. The main valley along the headwaters, where all the springs are, is dominated by invasive cattails and phragmites. I recently tried spraying a patch of nearly 100% phragmites by the observation deck at the Emerald Spring with Habitat, and I thought it did not work. Now I think the jury is still out.

Is there an alternative to poisoning these plants that will enable other species to compete more effectively? There are a variety of shorter plants trying to make a living under the phragmites and cattails and they will loose out if their taller competitors are not burned frequently. I’m already talking to the DNR about burning next year and maybe we’ll try Lindsay’s idea and do smaller, targeted burns, like in the valley just mentioned.

I ran the brush cutter for a while after Ron left and sprayed buckthorn resprouts on the steep hillside by Hwy 67 before calling it a day.

After a bath and a little yoga at the marl pit bridge, I put my bug net on and enjoyed the sunset. 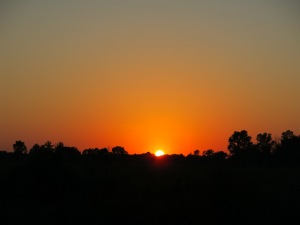 7 thoughts on “The Sand Prairie”