This is a photo of forked aster (state threatened plant), 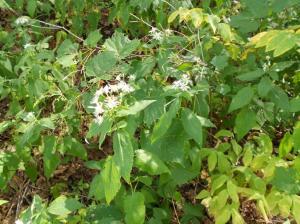 which is found in only one location at the Scuppernong Springs at present.  It is found on the east side of the sand dune in the more open woods, towards the bottom of the slope (left of the boardwalk). 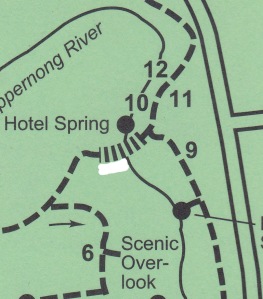 It appeared suddenly after several controlled burns. At times I have seen over 100 plants blooming in this general location. There is also a colony blooming at Paradise Springs, so I would suspect that it likes wet soils.

Lesser fringed gentian (state threatened plant).  The yellow flower is from
shrubby cinquefoil that is common to fens. 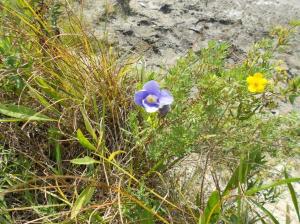 You will also find the larger gentian growing here too, probably reaching its peak, sometime around the middle of September.  (ed. note, the picture was taken along the Marl Pit)

This picture shows the large marl pit at its south end. 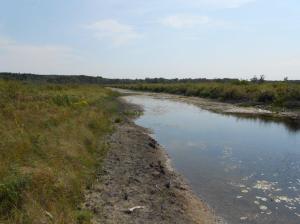 I have never seen the water level in the marl pits so low. The plant community to the left of the marl pit is part fen and sedge meadow. The fen is just starting to show its beautiful flowers, so people who walk along the marl pit in the next
couple of weeks will see several fen flowers including grass-of-Parnassus,
nodding lady’s tresses orchid, small fringed gentian (state threatened) Ohio
goldenrod, marsh thistle, and gerardia. Fens are springy wet grass lands
that very alkaline and the rich marl (calcium carbonate) soils make this a
very special site.

(ed. note Thanks Ron!  Regarding Purple Loosestrife and Tracy Hame’s recommendation that we introduce the Loosestrife Beetle, Ron explained that the DNR has been doing this for many years in this area.  I am following up with him on this to see if we should step up this effort.  The Purple Loosestrife appears to be getting the upper hand.)