I like to fancy myself as someone who knows how to think critically, but I suffered a momentary lapse of reason recently acting on belief instead of real knowledge. Fortunately, the consequences in this case were minor and served as a good reminder. To think critically consistently, a tool like the trivium is indispensible; grammar, logic and rhetoric, these are the keys we can use to distinguish truth from fiction and knowledge from mere belief or opinion.

In my last post I reported that we have been spraying spotted knapweed with glyphosate, aka, RoundUp, on the Sand Prairie believing this was the right approach for this invasive plant. The problem is I had not researched this plant i.e. I had not done my grammar and answered the questions of the Who, What, Where, and the When as applied to spotted knapweed. Lindsay sent me the link above via which I learned that the preferred technique is to “Apply selective herbicide clopyralid during bud growth in early June for best results (48 oz per 100 gal water).” I complained in the post that I didn’t have any clopyralid without doing the grammar on this compound. Thankfully, Lindsay did and he informed me that clopyralid is the active ingredient in Transline, which we do have. So this was a good reminder for me to apply critical thinking skills as we continue to try to restore the Scuppernong Springs Nature Preserve.

The scientific method goes hand in hand with the trivium and critical thinking and I’m trying a little experiment in the Scuppernong River just a few yards upstream from the bridge across the former embankment that created the upper pond. When Ben Heussner and his team of DNR Fish Biologists recently inspected the river, he pointed out that the river was not “head cutting” at this point and that is why it is still filled with silt and marl upstream. I’m trying a little low tech experiment to encourage the river start head cutting here.

Saturday, April 27, was a very pleasant day at The Springs and I started out spraying garlic mustard along Hwy 67 north of the old barn site. The understory here is severely degraded and consists mostly of garlic mustard.

Then I spent a couple hours girdling aspen at the old hotel site. There are some huge trees here and I was skeptical about attacking them with hand tools, but the bark is separating very easily from the trunks now and I made good progress. 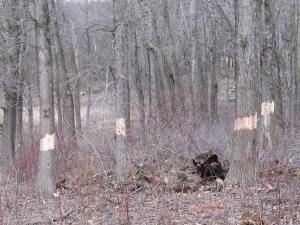 Around mid-day, I headed over to the Buckthorn Alley, or, perhaps tunnel is more descriptive, and got started on one of the nastiest buckthorn thickets I have ever seen.

I made a small dent and already you can start to see things, like the sky, that will make this section of the trail much more enjoyable and interesting.

The day flew by and I had a date with Pati at home, so I had to depart before the sun set. Here is a parting panorama taken from the Indian Campground.