Thanks again for following the Scuppernong Springs Nature Trail posts!

My everloving mate, Pati Holman, just returned from a 2 week road trip and we took a wonder-filled walk around The Springs yesterday evening. Unfortunately, she was not present to help with the burn, but I did my best to provide a glow by glow account of that exciting day.

The trees were fresh with myriad shades of soft greens and the air had a slight haze to it, so, in the late afternoon light, the images captured have a slightly unfocused, pastel-like quality. 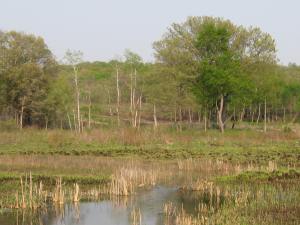 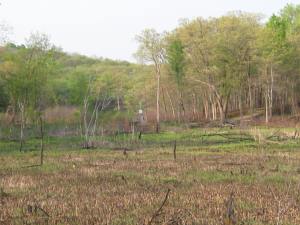 Pati and I were hanging out on the marl pit bridge when, fresh from a mud path, my spirit brother Thomas Barrett, aka Saturn Tre Volte, and “AJ” approached from the south. It took a couple seconds for the recognition to crystallize. I met Thomas at Ottawa Lake in May of 2012. He saw me lamely trying to swim and, introducing himself, promised to return in a few minutes to give me a lesson. He was a triathlete before being struck by a road raged driver while on a training ride on his bike. Thomas sought refuge camping at Ottawa lake as his head injuries slowly healed and he often helped me pile brush and pull watercress. Was it just a coincidence that Pati and I happened to be at the bridge when Thomas and AJ arrived (he had been living in Florida fighting legal battles to get compensation)?

It is natural, yet miraculous, that the plant life is recovering so quickly from the fires. New life is emerging everywhere, soon to erase all evidence of the fires.

Geraniums push up from the black. 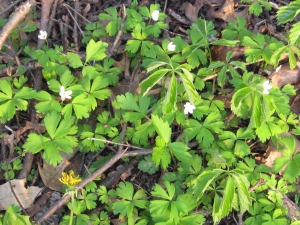 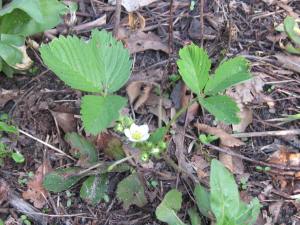 Views from the old barn site. 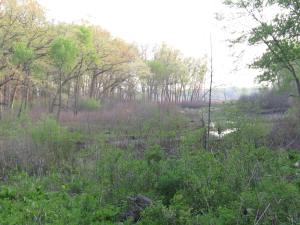 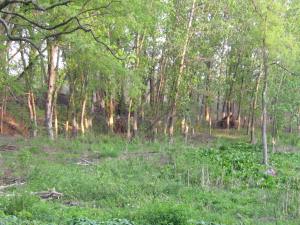 We saw this patch of May Apple last spring when we cleared the buckthorn from this area and it was thick with garlic mustard when it emerged. This year, we sprayed the garlic mustard before the May Apple came out with good results. 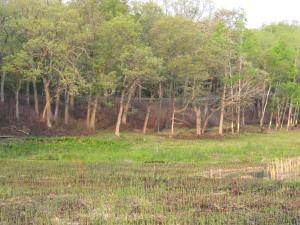 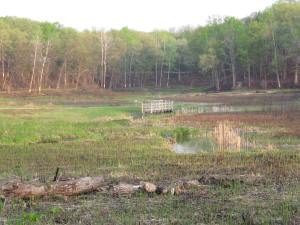 In the last post, I included a link to Wood Betony Stachy Officinalis (Betonica Officinalis), which I assumed was actually for the Wood Betony (Pediclaris Canadensis) that we see below at The Springs. 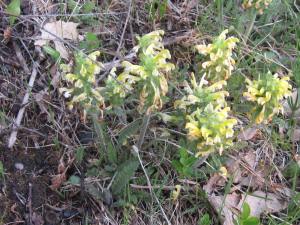 This case of mistaken identity could be dismissed as simply another one of my biological gaffes, if it were not for the fact that when I actually read the link to Wood Betony Stachy Officinalis, that I included in the post, and realized this was not the Wood Betony I had seen at The Springs, I thought immediately of my friend Thomas Barrett.

I first used Betony for a friend who suffered a closed head injury in a car accident.  Four months after the initial trauma she still experienced frequent dizziness, headaches and disorientation, and on a few occasions had up and keeled over.  She was unable to work or drive, which, as one might expect, made being a mother a rather difficult endeavor.  Although by nature not one to lean towards the use of herbs or natural therapies, desperation resultant from the lingering effects of the injury led her to accept my offer of herbal help.  I gave her three pellets of Homeopathic Arnica to address the impact related origin of the injury, and had her take a dropperful of Betony extract as needed when her head hurt, going on a traditional use of Betony to treat concussion.  I didn’t hear back from her, but saw her a couple weeks later, and to my dismay, her pained expression told that she was still suffering from the terrible headaches.  I offered her two droppersful of Betony tincture in a glass of water, thinking that perhaps a stronger dose was in order (strange, nowadays I’d tell her to take a smaller dose…).  In about 10 minutes she asked “What was that? My head doesn’t hurt anymore…”  When I told her it was the Betony I’d sent to her a couple weeks ago she replied, “Wow! I’m going to have to start using that.”  Doing so, she recovered completely.

Yes indeed, I did conjure up Saturn Tre Volte, and the very next day, one filled with dynamic choices, we did meet at the marl pit bridge in harmoniously synchronized serendipity.  Thomas, get yourself some Wood Betony stachy officinalis (betonica officinalis)!  Be well, my friend.

Pati really enjoyed the sights and sounds and I shared the feeling. 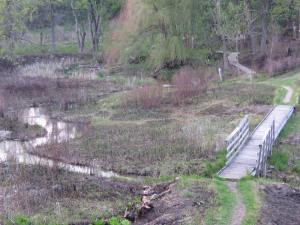 Check out this bunch of asparagus that Pati harvested. 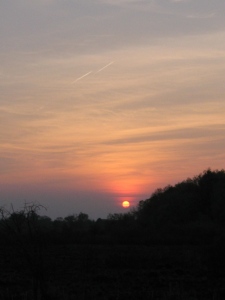 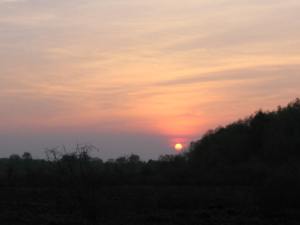