Last year we began attacking the phragmites that was rapidly spreading in the Scuppernong River valley area around The Springs. It had grown thick and tall with year after year of accumulated stalks providing support for each new year’s growth. In one area we tried gathering handfuls, tying them, and clipping the bunches at around 24″ high and daubing the the cut ends with Habitat. This worked very well as you can see in the video below taken by the Hillside Springs. Unlike other areas of phragmites that were not treated, only cut and burned, we see very little regrowth here.

In this area by the Hidden Springs, we cut the phragmites in early summer and in mid-October Lindsay sprayed the fresh new growth with Habitat. Again, we see excellent results with little new growth after the fire.

The following videos show the area just to the west of the observation deck at the Emerald Springs and then the area adjacent to the deck on the south and east sides, where the phragmites was cut last summer and burned this spring, but not treated with Habitat. You can see it is coming back like gang-busters.

In the next month we will be spraying phragmites and cattails with Habitat, focusing on the areas where these two plants dominate. In areas with more plant species diversity, we will not spray and instead, we’ll use the bunching, clipping and daubing technique; or we may just cut it. The goal is to open a window of opportunity for native wetland plants to re-emerge.

I dared the threat of showers yesterday and got a full days work in at The Springs. I wonder what creature made these holes on the sand prairie. 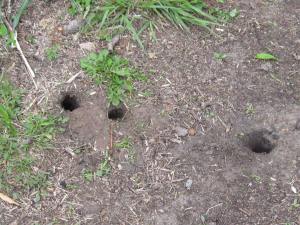 I continued girdling aspen; this time on the north side of the scuppernong river just west of the old barn site. Per Robert Duerwachter’s excellent history, The Ponds of the Scuppernong, this area was cleared and planted in corn. The opportunistic aspen and buckthorn have since moved in and removing them will give room for oaks and hickory to return instead.

In the afternoon I continued piling brush finishing the area on the east end of the cut-off trail between the trail and the river. The forest floor here is lush with grasses, geraniums, columbine, may apple and other flowers.

The view from the hotel site.

Last spring I was scolded, for good reason, by a man who complained that I was cutting down all of the wild plum trees along with the buckthorn. I noticed the difference myself and have made a concerted effort to discriminate between the two. I’m hoping to enjoy some of these fruits by the gaging station bridge. 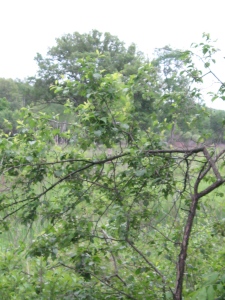 There are wild plum trees by the old barn site and along the loop trail heading north from there near the cranberry bogs.