Usually you’ll find me in the mountains this time of year, when they are gentle and uncrowded.  This year I’m looking forward to experiencing the waning days of summer right here at home — at the Scuppernong Springs.

I’m taking liberties at The Springs including attempting to transition the cattail and phragmities dominated marshes that border the river into wet meadows, which will encompass a wider diversity of flora and fauna.  The upper meadows (shown in blue below) are along the river valley upstream of the sawmill site #12 and the lower meadows (in red) are downstream from there to the gaging station bridge #5. 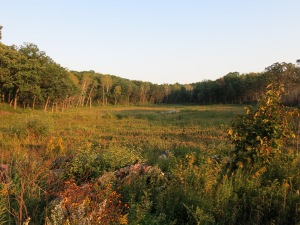 It was a beautiful summer day at The Springs yesterday and I got started with a project that has been on my mind for some time i.e., re-girdling the black locust trees on the south end of the loop trail.  Some years ago the DNR hired a person to girdle the trees in this area and they did approximately 200 of them before committing suicide (he did not mention the black locust trees being a motivating factor in his last note).  Unlike this unhappy forester, many of the trees survived despite being deeply wounded.  I re-girdled around 40 trees and added a new girdle to another 20 or so.

There is a vernal pool inside the south end of the loop trail just below the trees shown in the beginning of the video above that was filling in with phragmities, reed canarygrass and Japanese knotweed and I spent some time with the hedge trimmer cutting the flowering seed heads from these invasive plants. Then I headed over to the west edge of the lower meadows at the gaging station bridge to cut some cattails. Below are before and after videos, and again, I was able to cut above most of the flowering heads of the aster, golden rod and joe pye weed.

I almost finished before the hedge trimmer jammed. Then I headed up to the south end of the sand prairie and dug out spotted knapweed for a couple hours and finally finished the day pulling Japanese knotweed on the hillside just south of the Indian Springs. It was a great day to stop and enjoy the sky, the breeze and the summer flowers that are approaching their peak color. 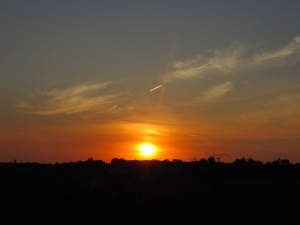 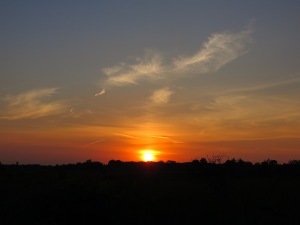 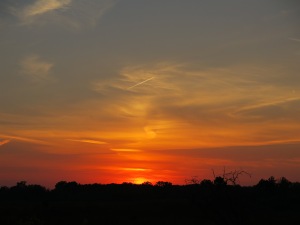