In the heart of a seed,
Buried deep so deep,
A tiny plant
Lay fast asleep.
“Wake,” said the sunshine,
“And creep to the light.”
“Wake,” said the voice
Of the raindrops bright.
The little plant heard
And it rose to see,
What the wonderful,
Outside world might be.

Way back on September 21, I participated with Jared Urban, Ginny Coburn, Zach Kastern, Rob “the seed man” Baller, and other nature lovers collecting native plant seeds at the Bald Bluff State Natural Area. Rob is a botanist/ecologist and current vice president of the Prairie Bluff Chapter of The Prairie Enthusiasts with many years experience studying native plants including managing all phases of seed harvesting at Applied Ecological Services, Inc., where he worked for many years. It was very enlightening to seek “the heart of a seed” with him. His scientific approach to ascertaining the viability of seeds in the field prior to collecting them made a lot of sense.

Simple tools like a small tray with edges, a magnifying glass and field guides are helpful. Rob’s approach for every “candidate” plant species was to take a seed sample, peel off the “paper” layers and identify the seed kernels. Only then, using sight and touching with fingers, tongue and teeth, could one judge whether or not the heart of the seed was fully formed and gauge its viability. Years of experience help too. He explained that often the first 10% of a plant’s seed output is not viable and only by peeling back the layers and closely examining the contents could one be sure it was worth the effort. That was a fun day and I learned a lot listening to Jared and Rob. Check out Rob’s new book: The Human Center; why Americans don’t have one; essays on instinct, human scale, and near-equality!

Last Tuesday, October 8, I took advantage of another absolutely gorgeous early fall day to get in some licks at The Springs.

Views from the marl pit bridge. 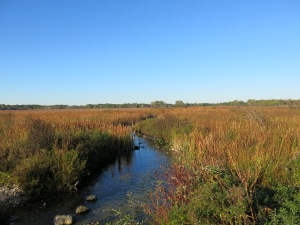 My mission was to cut the carpet of buckthorn seedlings and resprouts that had emerged on both sides of the newly opened cut-off trail. I discussed this with DNR trail boss Don Dane on a recent walking tour and, now that we are going organic, he suggested I take the brush cutter and mow the seedlings and resprouts, some of which were already over 6′ tall. It may be 2-3 years before we burn the Scuppernong Springs Nature Trail again and by then it might prove difficult to get a fire to run through the emerging brush if we don’t keep it down.

This is what I’m talking about. 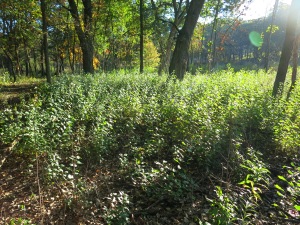 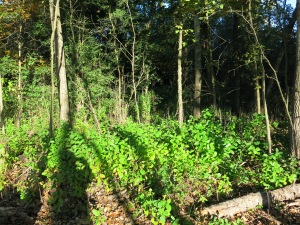 I’m OK with repeating this effort on a yearly basis pending the next scheduled fire. Cutting the brush will accumulate fuel and give other plants, like the many oak seedlings I found, a chance to get some sunlight. I was able to cut approximately 1/2 of the cut-off trail in a day.

There is an interesting ruin, which I suspect is part of the marl pit operation, alongside the cut-off trail at the red X on the map below.

Here is a close-up look.

Check out the cut-off trail ruins on your next visit!

The sun is setting far enough south on the horizon now to watch it disappear from the sand prairie.

4 thoughts on “In the heart of a seed”