I met Pete Nielsen, the “Master of Nagawaukee”, famous for the Pete Nielsen Laser Relays, at The Springs back in July of 2013.  When he told me that he grew up in the old stone house a mile or so south on Hwy 67, I practically begged him to share some of his scuppernong stories and pictures with us here.  I’m guessing he earned the nickname “laser” for his speed running track and cross country, but as the days passed, and I didn’t hear from him, I wondered if he forgot about it.  So, you can imagine my surprise and delight when I got his email tonight.  But first, and I don’t mean to keep you waiting…, a couple of updates.

The Southeast Wisconsin Chapter of Trout Unlimited is having a workday at the Scuppernong River this Saturday, December 6th.  We’ll need plenty of help making brush bundles to use to fill in behind the bio-logs, so please come and join us if you can. 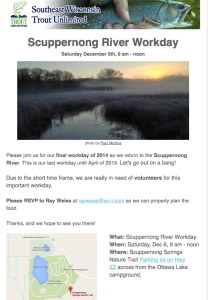 Pati and I spent the week of Thanksgiving visiting our friend, Chris Belleau, in Providence, Rhode Island.  The first snowstorm of the year was “major” for us, coinciding with the departure of our plane, and we missed our connection in Detroit.  Upon our arrival in Providence, the next day, we immediately drove to New York City for a little adventure and caught this sunset over the Hudson River.

Pati cleverly negotiated both free airline flights and a free night at the Doubletree Hotel in the Big Apple using accumulated Delta and Hilton points.  After a hair-raising drive through Times Square, we finally arrived safe, and barely sane.

We visited “ground zero”, the Empire State Building and the Museum of Natural History before heading north to our ultimate destination in Providence.  Rumor on the street is that this mammoth used to roam the shores of glacial lake scuppernong.

Chris has been creating works of art for almost 40 years, focusing on glass for the last 30 or so.  It was my first visit to his studio, and the first time I got to see him in action: breathing life into a ball of molten glass and turning it into a beautiful fish. 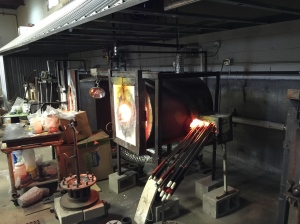 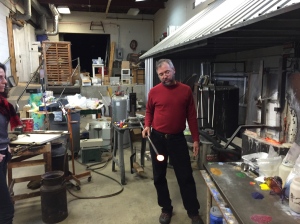 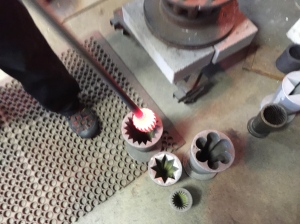 Chris and Grant fuse the eyes, tail and fins to the body.

The soft, hot, glass can be squeezed, stretched and twisted.

Better make sure this fish can stand on it’s own. 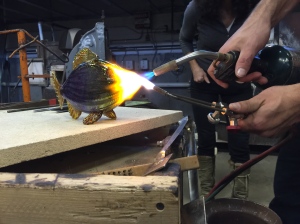 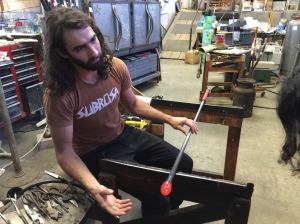 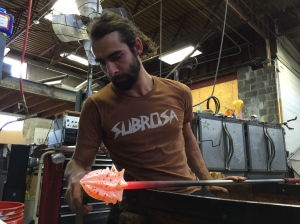 It was a lot of fun, but I’m glad to be back home at The Springs.

Sorry for the delay… when Pete’s email arrived and I saw his pictures, I couldn’t wait to post them here.  This one made it to the cover of Robert Duerwachter’s wonderful history of the Scuppernong Springs: THE PONDS OF THE SCUPPERNONG.

I grew up about one mile south of the trout ponds on highway 67 beginning in 1950. We moved there when I was a first grader. The house we moved to was built in 1855 with limestone quarried on site and gave rise to a structure with walls 18 inches thick. To this day it stands as a landmark as you enter the Kettle Moraine State Forest. The huge marsh which we could see to our north and west encompassed the hiking trails and Leans’ Lake (now Ottawa Lake) on the far end. It was the site of an occasional peat bog fire but usually a black hole for human habitation giving a backdrop to the rare but colorful Northern Light display and a privacy to be envied.

When I was a seventh grader I was given a Brownie camera for my birthday. My friends and I went snooping based on a story about an abandoned house behind the hotel. It was located about 75 meters north of the famed “concrete wall” from which it was totally obscured by brush and trees. We couldn’t see it until we were about 40m away. It was locked and all the windows were intact but being a poured concrete basement the north wall had partially caved in. We slid down into standing water, walked across some boards in the dim light and entered the house scaling the only stringer and pushed up through the trap door. The rest is in pictures of some furniture, a mounted deer head, a display case of birds and a picture of a beautiful young woman whose coy smile always causes me to ask who is was.

We exited the house in reverse manner leaving everything untouched. We then trekked through the woods to the hotel where we were greeted by Laurel Markham and Mrs. Keltsch and treated to milk and cookies. You couldn’t ask for a better summer afternoon as a childhood memory. 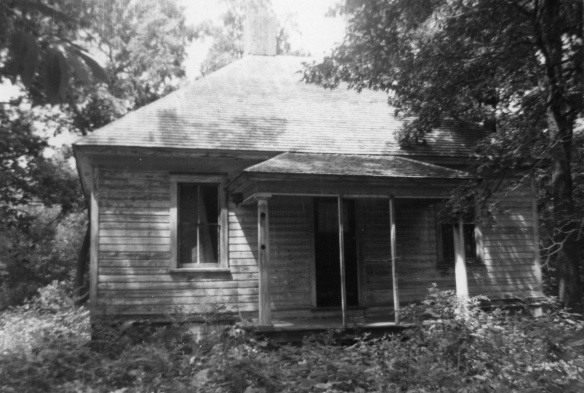 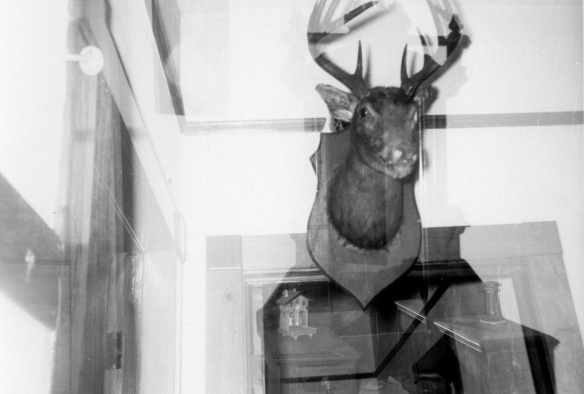 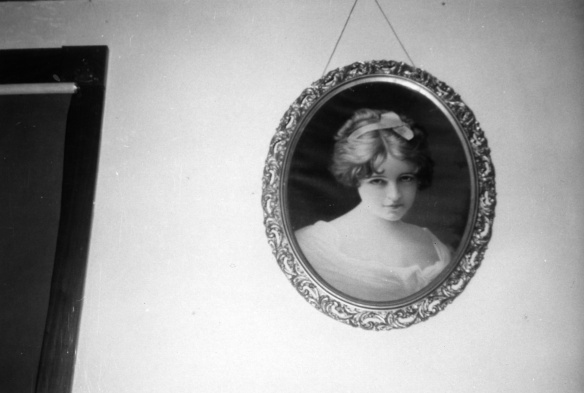 (Editor’s note:  I think the “concrete wall” Pete mentioned above is the remnant of the marl factory that still stands, and the foundation of the house he described is: “about 75 meters north”, just off the cut-off trail.) 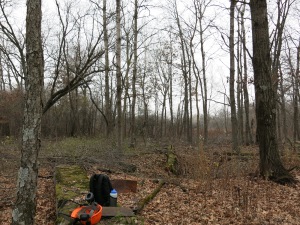 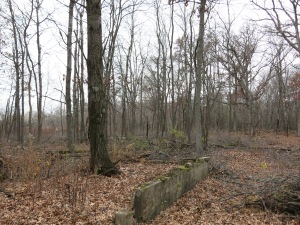 Back to Pete’s narrative:

The other set of pictures is witness to the famous trout ponds which were formed by man-made dams. These pictures were taken about 1991, showing the existing hiking trail around what was then the large southern pond. One can see the comparison after drainage and a year or two of growth of the reeds. 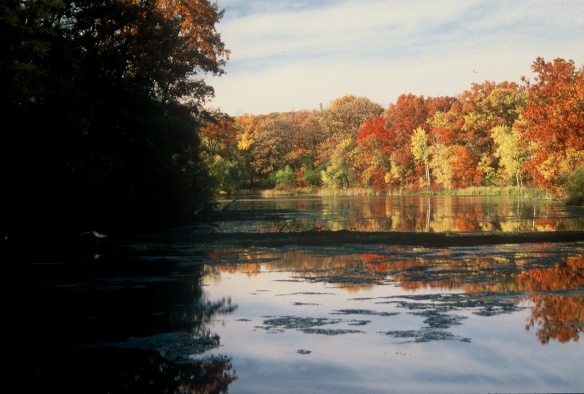 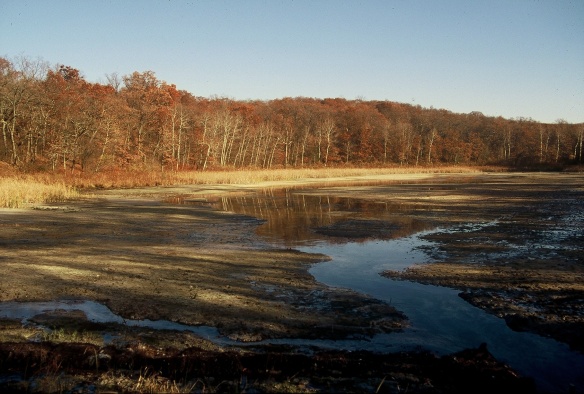 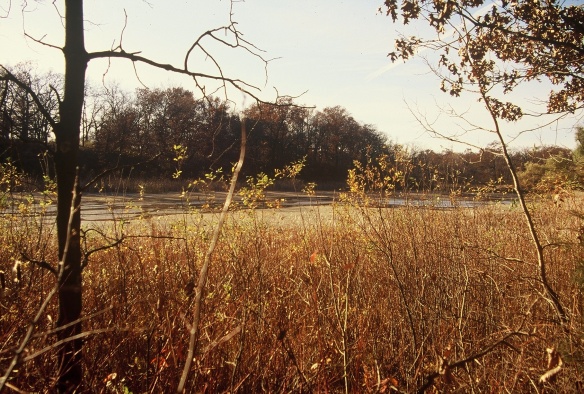 These pictures are priceless!  And this one is sooo good, I have to post it again.

Pete, thanks for taking the time and making the effort to digitize these gems you captured with your “old brownie”, and for sharing them, and your stories, with us!