When you merge curiosity with a little experience you get curience.  Add in a dash of optimism and you get opticurience.  Etymology aside, that about describes our states of mind as Pati, Lindsay and I embarked on what we thought would be the final leg of our Journey Down The Scuppernong River.   We new what to expect just west of Hwy 106, but the Prince’s Point Wildlife Area was a mystery. Would the ice be stable enough to walk on? How extensive were the wetlands bordering the river and what would the water level be. There was only one way to find out.

Our goal was to follow the river from Hwy 106 to where it merged with the Bark River just east of Hwy D, a mile or 2 south of Hebron.

In hindsight, the idea that we could cross the Scuppernong River at some point near its confluence with the Bark wearing teva’s is pretty laughable; par for the course though, if you know me.

This area is a major thoroughfare for migratory birds and we scared up hundreds of geese, cranes, ducks and other birds from the river as we progressed west. Flock after flock of birds passed over head. We were being watched and I’m sure they wondered where we thought we were going.

As we approached the only bridge over the river, we new this was our last chance to switch sides. I don’t know if it would have been any more hike-able on the south side, but I naively insisted that we had a better chance on the north side. 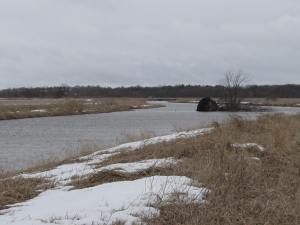 As the river neared the Prince’s Point Wildlife Area and escaped the confines of the embankments, it spread out in a vast flood plain. We tried to thread a path over the thin ice to the high ground to the northwest with the hopes of rejoining the river bank further downstream. When I began “post-holing” through the ice past my knees we realized that it was not our day. We retreated north to Koch Road leaving the flooded bottom lands of Prince’s Point and headed west to cross a bridge over the Bark River and connect with Hwy D, where we headed south to the parking lot and Lindsay’s waiting truck.

We are going to wait a few weeks and paddle the stretch from Hwy 106 to the confluence with the Bark River to complete our Journey Down The Scuppernong River. This will be a lot of fun!

See you at the Springs!

4 thoughts on “Journey Down The Scuppernong River Part 4”