Siddhartha taught me to listen to the river. Time is an illusion; the “present” moment is an embraceable gift to us. Instead, we often treat time as a commodity to be spent, or saved, or wasted. The past haunts us, we fear for the future, all the while missing the gift of the present moment. 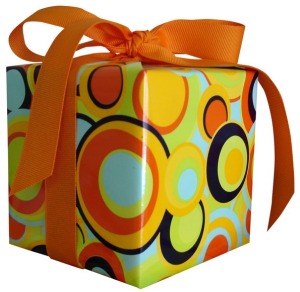 I was lucky to spend some time with the oaks this past weekend; paying attention, listening and feeling the gentle vibration of their subtle speech. The last few weeks I’ve been distracted with the burn, inmates and doctor visits but I found calm again in the present moment amongst the oaks.

On Saturday, May 11th, I joined Ginny Coburn and DNR Conservation Biologist Jared Urban for a workday at the Lone Tree Bluff Scenic Overlook to girdle some aspen trees. Jared leads the Endangered Resources (ER) team in southeastern Wisconsin. His crew varies in size from 3-5 people and they are responsible for approximately 20,000 acres.

Jared hobbled to the top of Lone Tree Bluff on crutches due to an ankle sprained while lighting a 90 acre prescribed burn at Lulu Lake on May 6th. This was after the ER team spent the bulk of the day helping to burn the Scuppernong. The expression “Still waters run deep”, was coined with Jared in mind; I calm down just being around him. But, you should have seen his face when he described the fires he lit at the Scuppernong; the tone vanished as his jaw dropped and I could see the 40′ flames reflected in his widened eyes. Below, Jared gives us a natural history lesson and explains the science behind girdling aspen trees.

When you contrast the billions and billions of dollars the government spends on the military, security industrial complex, versus what it spends to nurture the land, it recalls to mind TreeBeard’s lament in The Lord of the Rings that, ‘no one cares about the trees anymore’. The war mongers misleading us, our Saruman’s if you will, have propagandized us using the old divide and conquer strategy, demonizing Muslims, and distracting us from what our real priorities should be here in the homeLAND.

Whew, I’m ranting again. I’ll try to be more calmly passionate (sounds like something Joseph Conrad might have written, not to suggest I could have even sharpened his pencil). We had a lot of fun working together and I thoroughly enjoyed it. 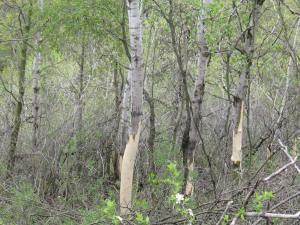 In the back row Diane, Carol, SwordMan, Princess and Ginny and in the front row, Carol, Thayer and Jared. 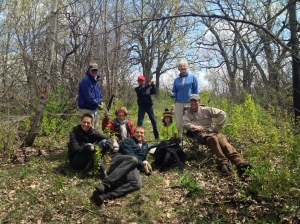 I’m new to this area so I stayed to explore a little. Here are a few shots of the bluff. 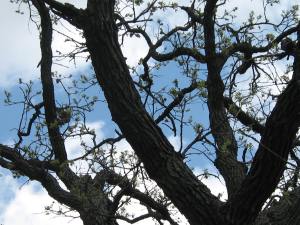 The Bluff Creek Springs emerge from the north side of the moraine and feed Bluff Creek. I had to check them out. 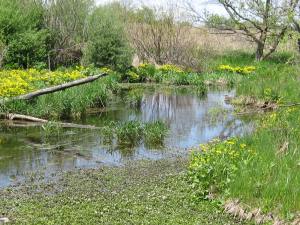 I found another set of springs on the east side of the moraine.

I wanted to hear what the oak were saying up at Lapham Peak, where Mike Fort and the Lapham Peak Friends have been restoring the prairies, oak woodlands and oak savannas for over 20 years. They have perfected techniques for cutting, stacking and burning buckthorn that are models of efficiency. This past week they did a 75 acre prescribed burn in the area marked in white on the map below and they burned approximately 177 acres total in the park this spring burn season.

This huge swath of the north flank of the peak extends from “the big slide” cross country ski trail east to the tower hill road. I was in awe taking in the scope of the effort as I well remember this hillside was thick with buckthorn. 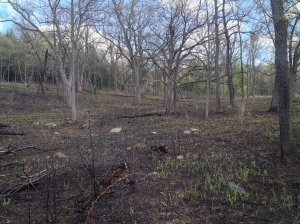 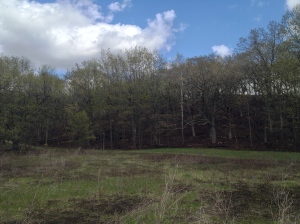 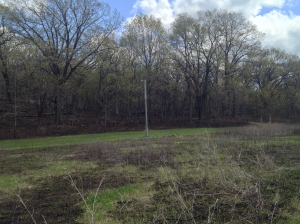 The oaks were swaying and singing gratefully with the blustery north wind, giving thanks for the tender loving care of the Lapham Peak Friends.

A bird’s eye view from the tower (I need a wind screen for the camera mic).

If you haven’t visited Lapham Peak lately, or ever, consider paying attention to what the friends have accomplished and spend some present moments there.

On Sunday, May 12th, I was back at The Springs. Wow, I wonder how long it will take for the forest floor to become green again. I wonder if the native flowers and grasses will have enough strength in their roots to push up fresh growth this year; or next. I began the day spraying garlic mustard, which appeared in isolated patches that escaped the fires. 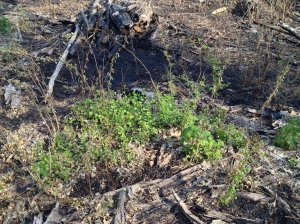 I was pleasantly surprised, and heart warmed, to see Lindsay, his wife, Connie and her granddaughter Sophia, arrive to pick up a load of wood.

When I talked to Don Dane after the burn he mentioned that this would be a great time to attack the spotted knapweed on the Indian Campground. Loaded with the recipe I got from Lindsay, I started that application. Spraying herbicide is my least favorite thing to do in the woods and I limit how much I do in a day. There is plenty more garlic mustard and spotted knapweed proliferating out there and I’ll be spraying for the next two months.

Some scenes from the Indian Campground. 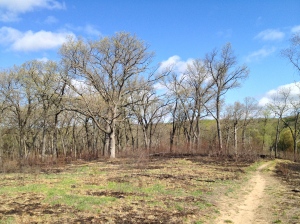 Looking down into the river valley from the Indian Campground.

Next on the agenda was girdling aspen. I intended to continue working at the old hotel site, but I thought better of it as I was walking down the river valley, and I attacked a few isolated clonal colonies that were spreading into the valley.

A quick stop at the Scuppernong Spring. 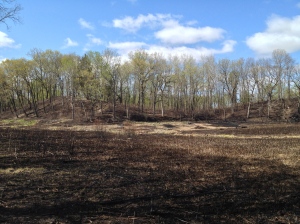 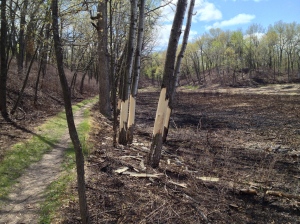 Finally, I started piling buckthorn just north of the old barn site. I have been a cutting fool for the last couple months thinking that I would get a crew of inmates from the Sturtevant Transitional Facility to help me pile, but I don’t think that is going to work out, so I’ll be piling for the next few weeks to catch up. I made around 10 piles and it was very relaxing work with a great view down the river to the west. 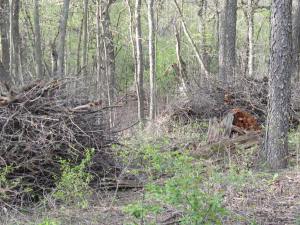 DNR Visitor Services Associate extraordinaire Amanda Prange is leading an effort to install a new set of signposts to match the trail brochure.

I followed the channel of the Indian Spring’s towards it’s junction with the Scuppernong River and caught this panorama video. The marl pit factory ruins are just to the right of the sun. 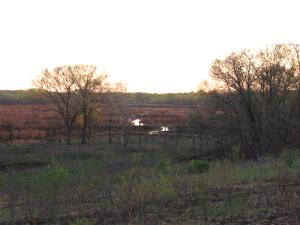