Ben Johnson and I shared one of those special days yesterday at The Springs, that make it all worthwhile.  We ignored the intermittent rain and incessant mosquito attacks to plant a garden at the Indian Springs.  Watercress and quack grass are out: native sedges, grasses, ferns and flowers are in.  When these plants take hold this will be an even more magical place than it already is. 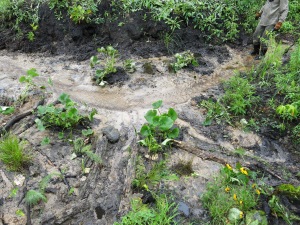 We started the day with empty wheel barrows, just down the trail from the main parking lot on Hwy ZZ, in the buckthorn alley.  The emergence, or should I say, explosion, of a wide variety of native plants along this trail makes referring to it as an “alley” a misnomer.  I’ll have to come up with a new name.  So we arrived at the Indian Springs with our diverse loads of plants… 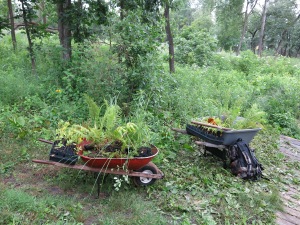 … and surveyed the void left by the recent removal of watercress and quack grass. 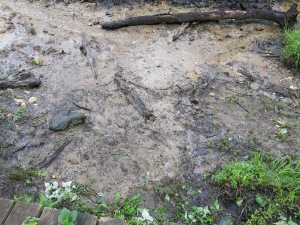 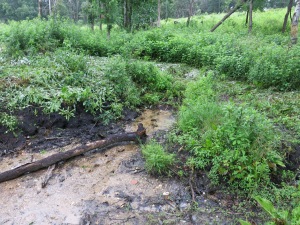 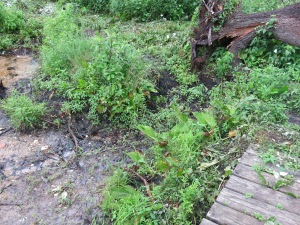 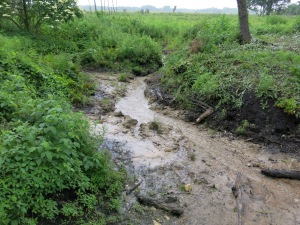 The profile of stream bed has changed significantly since I removed the mud dam in the narrows of the picture above, and we furthered that process along by cleaning the debris from the literally dozens of springs that emerge here.  I don’t have scientific data to back this claim up, but it appeared that the volume of water flowing from each spring increased significantly as the obstructions were removed. 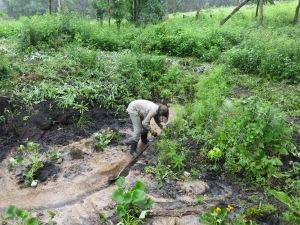 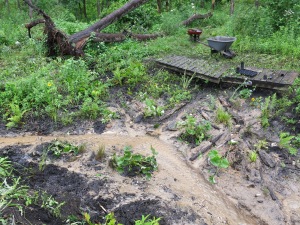 Although I try to live in the present moment, I can’t help but look forward to next spring, when the transplants have settled in and we should have the deck repaired.  We spent the later part of the afternoon cutting and poisoning sumac and pulling spotted knapweed amongst the lupine patches on the west side of the sand prairie.  Thanks for your help Ben!

Pati and I are going on a short vacation (back around July 15th), so I got some licks in at The Springs this past Tuesday, cleaning up the areas around the hillside springs.  I mowed the spur trails that lead to the hillside and hidden springs, as well as the trail that leads to the emerald springs and the unnamed springs just to the north. 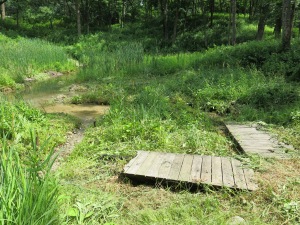 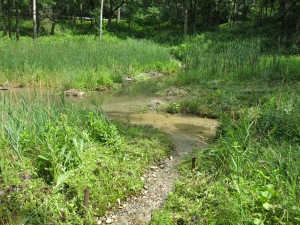 In what will become a semi-annual event, I pulled loads of watercress from the headwaters at the Scuppernong Spring down to the first bridge downstream.  When my fingers encountered the planking they installed way back in the days when this stretch of the river was a trout factory, I couldn’t help but pull this garbage out.  I found huge 6×8″ beams spanning the river bed from bank to bank onto which the planks had been nailed.  These unnatural impediments to the stream flow must be removed. 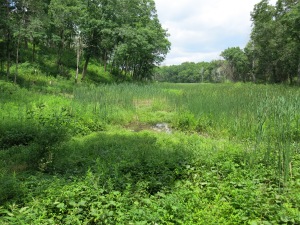 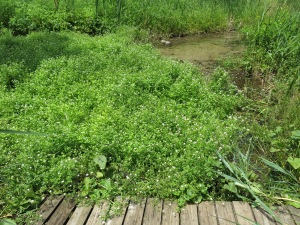 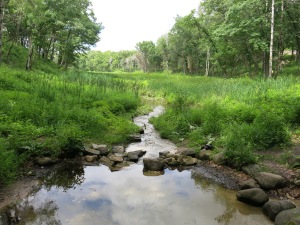 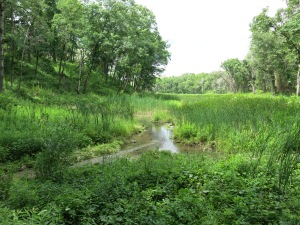 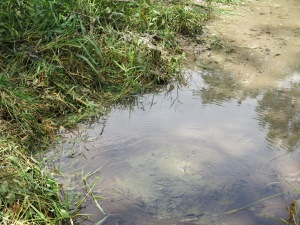 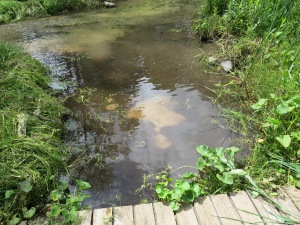 After removing the planks shown below, the height of the river noticeably declined.  The channel is now much deeper and more distinct.  When I showed the area to Ben on Wednesday there were two ducks, normally very skittish when humans are near, who refused to leave.  I think they liked the change. 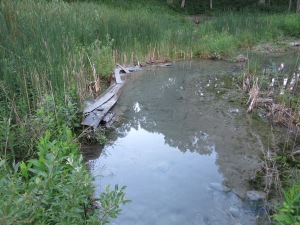 Along with the aforementioned beams embedded in the river bottom, there are still more planks and pipes left over from the old days that we plan to remove in the coming weeks.  This will go a long way toward facilitating the river’s return to a natural steam bed in this area.

Again, the late afternoon was spent digging and pulling spotted knapweed along the main trail on the sand prairie.

I thought it was going to be a classic Scuppernong Sunset as I bathed in the river, but this bank of clouds came up fast from the northwest.  I can’t remember a spring and summer where we have gotten so much rain so consistently. 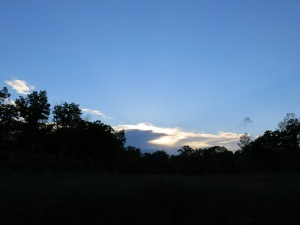 7 thoughts on “The Indian Spring Garden”