Our Journey Down the Scuppernong River continues as we take a closer look at the Prince’s Point Wildlife Area. I got over the shock and dismay at the fate of the river once it crossed Hwy 106 and I’ve been learning more about the area and its history.

Large scale agricultural farming in natural wetland areas requires major land alterations to control water levels and it is doubtful that the changes wrought by the mud farmers along this stretch of the Scuppernong River would have been allowed under current environmental regulations. In 1952 Dean Kincaid (rest in peace) diverted the river from its natural meander into a ditch that facilitates managing the water level on this huge mud farm, which sits between Hwy 106 and Prince’s Point and is now run by his son Gary, and his son Corey. Other farmers, on what is now the west side of Prince’s Point Wildlife Area, did similar things to control Spring Creek and Steel Brook, which enter the basin here, and drained these wetlands for farming (see map below). Thus the land was “altered” and a new reality created

On July 17th I had the pleasure of getting a guided tour of Prince’s Point from Charlie Kilian, the recently retired property manager for almost 25 years, and Bret Owsley, the Wildlife Supervisor responsible for the area. Charlie is a mineral salt of the earth kind of guy with weathered face and hands, a quick smile, lots of stories and intimate knowledge of land, water, flora and fauna. Bret loves working with his “constituents” and I really appreciated him setting up the date with Charlie and bringing the maps that proved so useful. They picked me up at the boat dock on the west side of the wildlife area and Charlie told the first of many great stories. When he arrived on the scene the area was referred to as Princess Point, named after an “Indian” Princess. Charlie caught hell for pointing out that Native Americans didn’t have “princesses” and for changing the spelling of the name to Prince’s Point, after a man with the surname Prince, who ran a ferry service over the Bark River at this location.

I mentioned that I wanted to collect a water sample from the Scuppernong River and Charlie thought of a route we could take with the DNR truck to get very close. We entered the wildlife area on a DNR “2-track” access road off of Hwy P, that had not been mowed yet this year, eventually arriving at a very wet point where we changed plans and headed up to some high ground. This viewpoint is mark VP on the map below and the impoundments are numbered 1-4 per the order they are introduced in the discussion. The brown shaded areas #3 and #4 comprise around 106 acres that were originally part of the Kincaid farm and transitioned, first to Wetland Reserve Program lands, and then around 2000 the DNR acquired full title.

Charlie and Bret do a great job explaining their management strategies for the Prince’s Point Wildlife Area in this video.

The video ends prematurely and accidentally as I was asking Bret about his role as a Wildlife Supervisor (I should have simply started another recording session). He went on to explain what motivates him — his passion for managing the land for the best balance possible given the “altered” conditions we have inherited; it’s always on his mind. As we parted Charlie shared his experience with lymes disease, something that still affects him, and how the “state” fought him tooth and nail to deny that his infection was work related, even though any rational person, honestly looking at the evidence, would recognize it was. Ah,”the state”, it’s a figment of our imaginations. It’s people who implement the mental conception we refer to as “the state” and it’s a shame those with the power to do so did not treat Charlie right after his many years of dedicated service. Charlie was pretty stoic about it. It bugs me.

I stopped at the intersection of the Scuppernong River and Hwy 106 on the way back to The Springs and I walked out about 1/2 mile along the ditch past the third pumping station to get my water sample (the other sample was taken from the Scuppernong Spring and I will compare and post the results when they come back). I recently talked to Gary Kincaid about how they manage surface water on their mud farm and he explained that it is filtered vertically through 4-5′ feet of organic soil, i.e. peat moss, and as much as 25 feet horizontally, to where it is captured in clay or plastic drain tiles. The drain tiles are spaced approximately every 50 feet and run the length of the fields emptying into canals at the perimeters, from which it is pumped into the river when necessary. Gary emphasized that, given the high cost of fertilizer, herbicides and pesticides, they use the bare minimum on their farms. 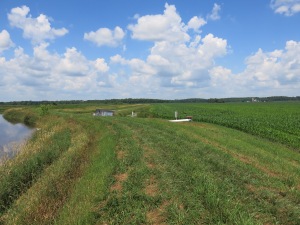 There are no comprehensive programs to test this nonpoint source pollution; it is done on a case by case basis.

Back at The Springs, I sprayed Milestone on the buckthorn resprouts on the steep hillside below Hwy 67. The burn this past spring only top-killed the heartier saplings and they already have 2-3′ of new growth. Then I spent some time studying weeds on the sand prairie and decided to make a date with Ron Kurowski, the retired DNR Naturalist who lead the Scuppernong River Habitat Area restoration, and whose shoes the DNR has yet to fill, and he generously agreed to meet me the next day.

It was plenty hot and buggy out there and I was baked when I got these storm cloud shots before heading for home. 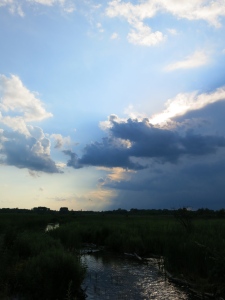 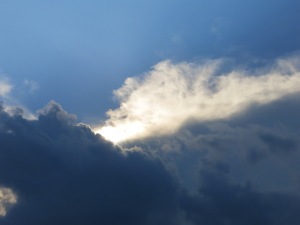