I checked the weather during the taxi ride home from the airport and knew that I was meant to be at The Springs for the winter solstice. Wikipedia informs us that the word solstice comes from the Latin sol (sun) and sistere (to stand still) but it neglects to explain that it stands still for three days and how this astrological fact is at the core of Christianity.

“It appears as though the sun has been moving toward the south and growing smaller every day, but on the evening of the winter solstice (typically December 21st or 22nd), this comes to an end.  On December 22nd, 23rd, and 24th the sun does not rise closer to the south as it has each day in the previous six months.

Instead, the sun will rise in the exact same location; it is without movement.  The sun is considered dead for three days.  There is a three-day period when our savior, the King of kings, the son of God (the sun god) is dead.  The new sun is born on December 25th, rising on the horizon and advancing toward the north as it begins its new life and the days begin to grow longer.  In fact, above 66.5 to 67 degrees latitude, the sun will actually disappear from the horizon during this three-day period.”  Astrotheology & Shamanism Christianity’s Pagan Roots by Jan Irvin & Andrew Rutajit (video version here)

It was this book along with Thomas Paine’s The Age of Reason, that helped me understand religion and liberate myself from it. And what does the word mean after all? It comes from the latin religare: to bind fast. No wonder tyrants and empires have used it to divide and control people.

How can one replace organized religion? Leo Tolstoy explains it at the end of Anna Karenina in a conversation between the noble landlord, Levin and one of the peasants who works for him:

“Oh, well, of course, folks are different. One man lives for his own wants and nothing else, like Mituh, he only thinks of filling his belly, but Fokanitch is a righteous man. He lives for his soul. He does not forget God.”

“How thinks of God? How does he live for his soul?” Levin almost shouted.

“Why, to be sure, in truth, in God’s way. Folks are different. Take you now, you wouldn’t wrong a man….”

The thought of actually living in truth for my soul excites me like it did Levin, but I’m just as likely to fail at it as he was.

Lots of wet, heavy, snow was predicted for the night so I seized the day and burned brush piles in the areas marked in red below.

My first stop was on the cut-off trail.

The freezing drizzle from the previous day made the piles a little harder to start but I managed to get the 25 in this area lit by lunch time. 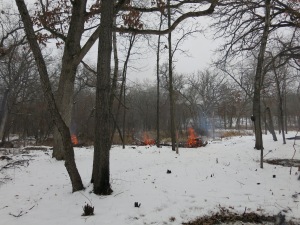 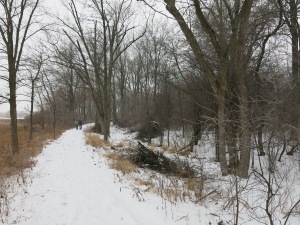 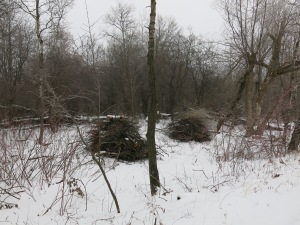 As I was lighting the last pile, John and Sue Hrobar stopped by to share exciting news. They report seeing trout much more frequently than in the recent past and Sue was startled by a pheasant that was lurking under the marl pit bridge. John told me the DNR had been there (on Saturday, December 14th) installing bio-logs in the river just a little upstream from where I was burning brush piles on the cut-off trail (see blue stretch of river on the map above). I hastened to check it out!

This is a continuation of the excellent work they did back on June 30th.

Nicely done! Mike Kuhr, from the Southeast WI Chapter of Trout Unlimited, added a comment to my last post referring to the work they did on the river with the DNR and I completely missed what he was talking about, responding with a non-sequitur from Taj Mahal’s “Fishin Blues“.

The solstice fires, driven by northeast winds, still burned brightly as I departed.