When DNR Fisheries Biologist, Ben Heussner, contacted me last week about a workday on the Scuppernong River, I didn’t dare to imagine the fantastic outcome we would realize yesterday.  “Fix the water“, that’s what Tracy Hames, executive director of the Wisconsin Wetlands Association,  preaches and we put that mantra into action with a Group Trout Stream Therapy session.

Ben set the table last December with 2 workdays on the river where the DNR fisheries team, along with help from Southeast Wisconsin Trout Unlimited, installed dozens of coconut hull biologs to re-establish the river’s natural meander.  Then Mike, a trout unlimited volunteer from Wilmette, IL, and Ben coordinated to bring a group of volunteers from Trinity United Methodist Church up to help us fill in the wet areas behind the biologs.  I can say unequivocally that this was the hardest working team of volunteers I have ever had the pleasure to work with. They were filled with the spirit for sure! 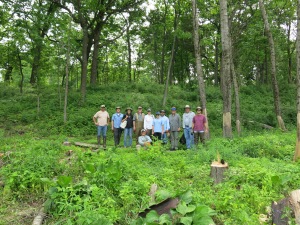 Ben Heussner met Ben Johnson, Dick Jenks and myself to scope out the situation and plan the day’s work.

He is a very busy dude, and shortly after he introduced us to the group from Trinity United Methodist, we were on our own.  It didn’t take long to establish a system to deliver the aspen I had cut to the locations on the river where it was needed.

Our first site was the major westbound bend in the river, where we constructed a V-shaped wedge to define a single stream channel.

We were literally on a roll and the team from Trinity was not shy about getting wet and dirty, which ironically, I found very refreshing. 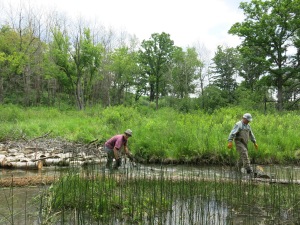 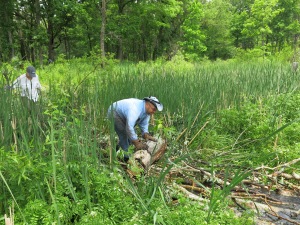 Thank you, thank you!  Look what you accomplished.  The views below begin at the first site we worked and proceed downstream. 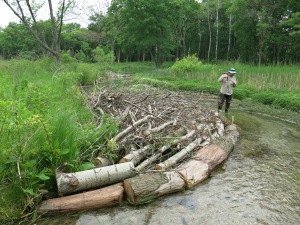 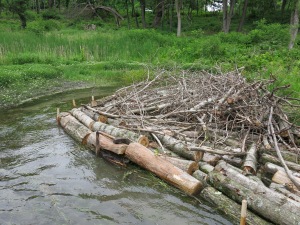 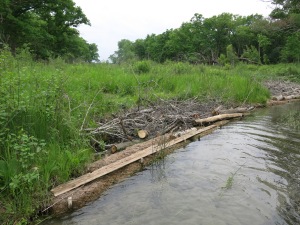 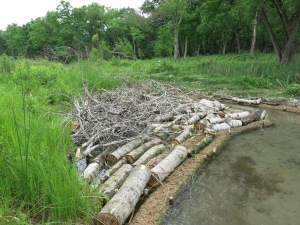 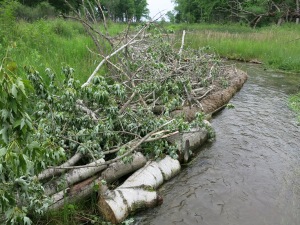 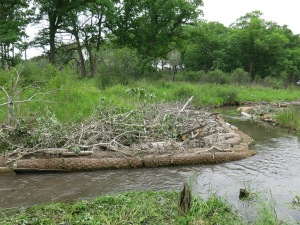 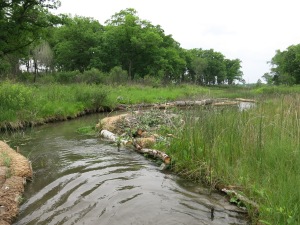 We hope to work with volunteers from Trinity United Methodist again.  What a great group!

On our way to take a walk up the river and inspect our work, Ben Johnson and I ran into this sand hill crane and chick, who were also checking it out. 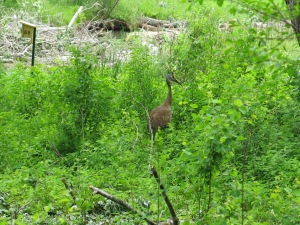 This is the point downstream of the recent activity where sand and marl is collecting after being flushed down the river.

We continued to walk upstream and review the day’s work.

The meadow on the south side (right side in the video above) is especially lush with native plants and flowers. 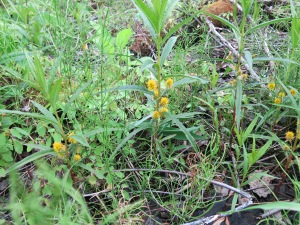 Ben and I agreed that the velocity of the river had definitely increased as a result of the work.  Confirmation bias?

We’re not done yet!  Ben Heussner will be back in the next couple weeks to do an elevation survey of the area around the hotel springs bridge.  He is confident that, with a little excavation of the river bottom here, we can get a headcut traveling.  This will flush out the marl and sand that collected in the riverbed upstream, while it was under it was under THE PONDS OF THE SCUPPERNONG.  The result will be significantly improved trout habitat and restoration of the headwaters to its natural condition.  I can’t wait! 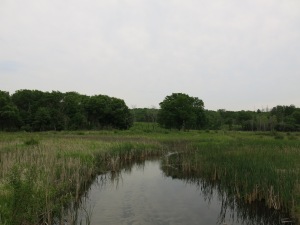