The world rides on the back of a turtle! It’s a beautiful metaphor for that which is beyond our comprehension e.g., the nature of God, the origin of the Universe, or our existence in the spiritual realm.

My first exposure to “turtles all the way down” was during an interview of Dr. Patrick Byrne by Jan Irvin and Richard Grove on Gnostic Media, where they examined the “cosmology” of regulatory agencies that are supposedly monitoring our financial institutions and their speculative shenanigans.

… There was this story about Bertrand Russell, who was once debating with a Hindu cosmologist.  And the Hindu cosmologist said: “The world rides on the back of a turtle”.  And Russell asked: “What does the turtle ride on?”  And the Hindu replied: “On the back of another turtle.”  “Ok, and what does that turtle ride on?”, to which the Hindu replied: “Sorry professor, but it’s turtles all the way down“.

In the Hindu tradition the world rides on elephants, who are in turn supported by a turtle. It is mysterious that the turtle should play such a prominent role in the cosmology of traditions as diverse as the Hindu and Lenni Lanape. I just encountered it again in The Last Of The Mohicans by James Fenimore Cooper in the character of Uncas, the son of Chingachgook, chief of the Sagamore.

In the story Uncas, the scout Hawkeye and major Heyward, in their attempt to free Cora and Alice, have fallen under the control of a tribe of Delaware Indians and Uncas is about to be burned at the stake. When his captors rip off his hunting shirt, they are frozen in their tracks by the sight of “the figure of a small tortoise, beautifully tattooed on the breast of the prisoner”. Seizing the opportunity to assert his rightful status Uncas declares: “Men of the Lenni Lenape! My race upholds the earth! Your feeble tribe stands on my shell!”

I often wonder what I stand on; is there any substance there? What is “there”. We have to start with principles and, per Mark Passio’s fantastic seminar on Natural Law, I’m trying to focus on the generative principle of CARE. What we care about is our spiritual currency. How we spend our time, and what we pay attention to, are the causes that manifest the effects we experience.

I was happy to spend another day paying attention to The Springs and satisfied with the effects, modest though they were. Given the recent heat wave, I thought conditions might be good enough to continue burning brush piles on the northeast end of the trail, where the cut-off trail intersects with the main trail near signpost #13. 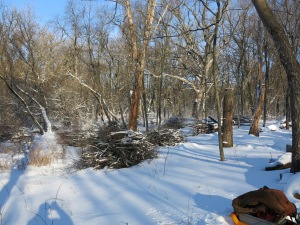 I left my gear and walked down to the Hotel Spring to get some water. 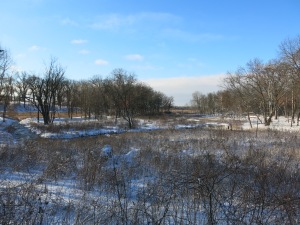 We did get an inch or so of powdery snow the night before and I had my doubts about lighting the piles. I poked my chainsaw into one, consolidated a stack of wood, and tried to light it. My whimpering torch barely generated enough heat to light a doobie. Hmmm, must be the cold temperatures are not allowing the liquid propane to convert to gas at a fast enough rate, I speculated. The wood was wet and green and I barely got one pile going. I decided to switch gears and cut buckthorn on the east side of the old cranberry bog on the north side of the trail.

I gave it my best shot but, after bending a chain while trying to remove the bar from a pinch, and spilling the contents of the chainsaw gas tank on myself, I thought perhaps the price was too high to spend anymore time paying attention to buckthorn that day. 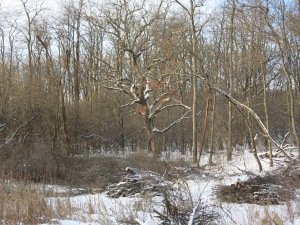 The white oak revealed above was my reward.

It’s a good thing I stopped when I did or I would have missed this classic winter sunset on the Indian Campground. 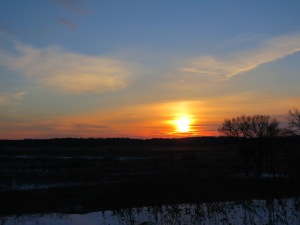 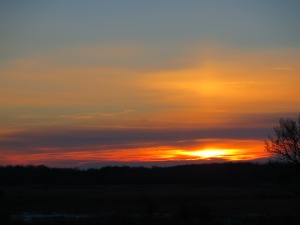 4 thoughts on “Turtles All The Way Down”