It was a clear and cold morning at the 2014 Scuppernong Springs Olympics.

In, perhaps the biggest upset in Olympic history, Andy Buchta…

…surprised the pundits and walked away with the gold medal in the PilingStyle event. In his first appearance at the Olympics, Buchta, a roofing professional by trade, impressed the judges with his flawless technique and flair for the dramatic as he created tall, compact and uniquely expressive piles from the scattered, snow-covered, buckthorn brush. Andy flew under the radar all week as most eyes were focused on three time gold medal winner, the Russian brush piler, Boris Maksmopilenovitch.

(I turned on the camera’s date-time function by mistake!)

The Buckthorn Man surveyed the field just before the competition began.

While Andy experienced the thrill of victory, The Buckthorn Man suffered the agony of defeat. All week long in training The Buckthorn Man set new records for slashing and burning in his signature ChainsawStyle event. He was notably loose; joking with teammates, and seemed to have put his failure to win gold at the 2010 Hartland Marsh Olympics behind him. But on the big day, he bolted upright at the 5:30am alarm and it was game on.

Unfortunately, and indeed, heartbreakingly, it was not The Buckthorn Man’s day. The hose on his Red Dragon Torch cracked and spewed propane gas preventing him from lighting it and starting a brush pile on fire. Then, without a heat source, he was unable to keep his poison sprayer from freezing up, despite the fact that it contained only anti-freeze and triclopyr. When we ran into The Buckthorn Man at the trailhead, he was inconsolable; refusing, or perhaps incapable, of answering any questions. 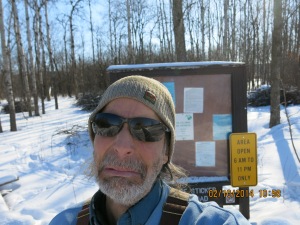 We located this transcription of a discussion of The Buckthorn Man’s disappointing performance between Bob Costas and Cris Collinsworth on the internet (no wonder it was not televised live!)

Costas: I’ll be frank with you Cris, I think it is highly suspicious that The Buckthorn Man’s Red Dragon torch failed just when he needed it the most. I suspect the Russkies and, given his background in the FSB, that Putin was behind it.

Collinsworth: Ahh Gee, I dunno Bob. The Cold War is over isn’t it?

Costas: Not so fast Cris. Do you really think those evil commies have given up their dream of overthrowing monopoly capitalism and replacing it with a socialist paradise?

Collinsworth: But Bob, according to Antony C. Sutton’s seminal work Wall Street and the Bolshevik Revolution, WE funded the Bolshevik revolution and helped Trotsky and Lenin win recognition for their fledgling revolutionary government.

Costas: That sounds like a bunch of conspiratorial drivel to me Cris. Why would Wall Street support the Bolshevik Revolution?

Collinsworth: Bob, have you never heard of the Hegelian Dialectic, you know, thesis/problem, antithesis/reaction, synthesis/solution? The problem for the monopoly capitalists was that the masses were beginning to recognize how badly they were being exploited and how the rich were getting richer and the poor were getting poorer. So the financial oligarchs in the west created the reaction in the form of the evil communist empire to scare the people into believing that their liberties and freedoms were being threatened. Since Wall Street, via it’s interlocking relationships with the central banking systems across the world, was controlling the finances of both the “West” and the “East”, their solution was to play one off against the other, thus keeping the military industrial security complex fed and causing both the U.S. and the USSR to go deeply in debt TO THEM.

Costas: That is total Bullshit Cris. Cut his mic! (Costas, storms off the sound stage.)

Although he might have been able through shear force of will to persevere and get some work done, The Buckthorn Man decided to take the day off, relax, and enjoy The Springs.

When I emerged into this view of the prairie, I was stopped in my tracks by how quiet it was. I’ve been so busy at The Springs — I haven’t taken as much time as I should to look and listen.

Here is the view from the Marl Pit bridge, where I stopped to listen to the river.

The view from the gaging station bridge. 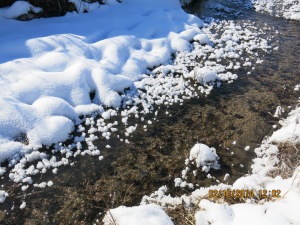 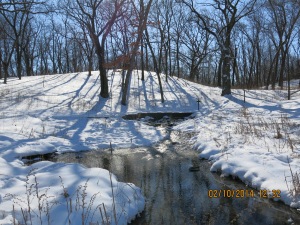 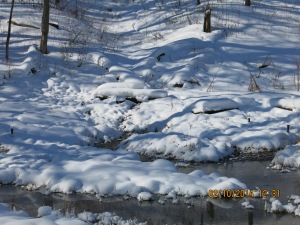 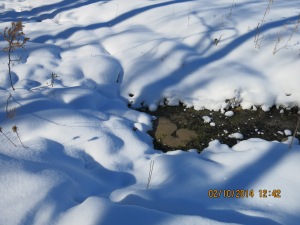 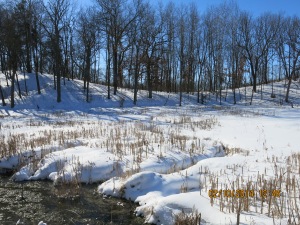 This one doesn’t have a name. How about the Robin’s Spring?

I left The Springs early and bought a new Red Dragon torch on the way to the Hartland Marsh, where I picked up a load of seasoned buckthorn for the party this weekend and spent the rest of the day wandering.

If you are, or want to become, a SuperFriend♥ of The Springs, or you just love The Springs, or you just want to help the Buckthorn Man celebrate his birthday, then come to our open house in Milwaukee on February 16th from 2-8:00pm. If you have not already received an invite via email and want to come, please contact me! Pati is going to make some crazy good food and we’ll have beer and wine and a roaring buckthorn fire outside on the patio. We hope to see you on the 16th! 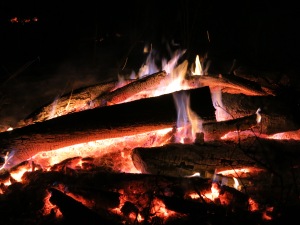