We’ve been celebrating the end of 2014 at The Springs 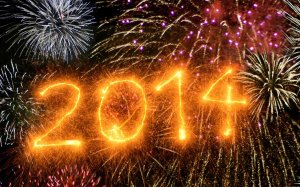 with fire works of our own.

It’s been a great year, and we’ve accomplished a lot — some of which is really good.  Visit the Archives drop-down list, on the right side of the Scuppernong Springs Nature Trail Home page, and pick a month to scroll through.  I did just that, and added my favorite moments of 2014, one for each month, to the Posts I Like section of the Home page (scroll down and look on the right side.)  I hope you have enjoyed your journey on The Scuppernong Springs Nature Trail with The Buckthorn Man in 2014 and that you will continue with me in 2015!  I welcome your comments, suggestions, clarifications and corrections.

There is one thing that buckthorn fears more than The Buckthorn Man: FIRE.  Buckthorn will fight you until you subject it to the flame.  When you’ve been offended, slapped, pricked, tripped, mocked and poked by buckthorn, like The Buckthorn Man has, then you will understand how satisfying it is to cut, poison and burn this vermin foliage in a few hours time.

Usually we wait for snow cover before burning brush piles, but this Winter has been wet enough that I considered giving it a try.  Our first burns at the Ottawa Lake Fen SNA were safely conducted and very productive.  It saves a tremendous amount of time and effort when you can throw freshly cut buckthorn onto a raging fire, as opposed to piling it to burn another day (when it may be buried under 6″ of snow.)

Last weekend I began burning brush piles along the northeast rim of the loop trail.  I tried, and failed, to light some of these piles last year, and was glad to get another chance at them sans snow. 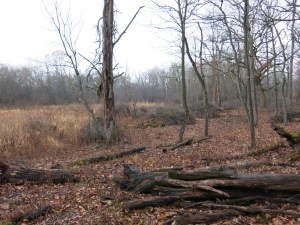 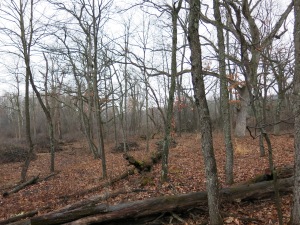 I’ll never get tired of saying ‘it was a great day’! 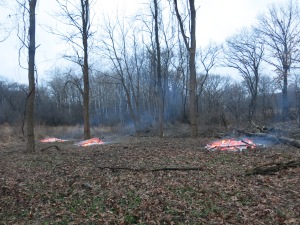 Andy Buchta came out to help me and mentioned that he had finished piling the brush we cut, and did not burn, at the Ottawa Lake Fen SNA.  Thanks Andy!

On Sunday, I had a date with Chris Mann and the Kettle Moraine Land Stewards and we continued where Andy and I left off on Saturday.  But first, here are a couple of “the day after” views of what we accomplished. 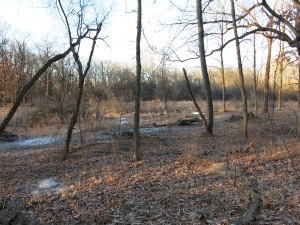 The slope from the wetland shown above, east to Hwy 67, transitions from mostly buckthorn to mostly black locust.  The black locust has been harvested but many of the buckthorn were simply pushed over.  The ones that were cut did not appear to be poisoned.  The combination of battered buckthorn and slashed black locust resembled a war zone, and I wanted to clean up the mess. 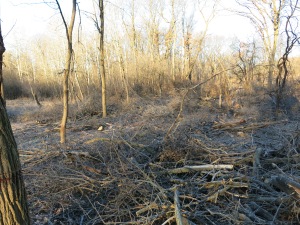 Chris, Andy and Austin joined me as we re-cut and poisoned the buckthorn stumps and fed huge fires with buckthorn and black locust slash.  We cleaned up the lower portion of the hillside, leaving the rest for a contractor that the DNR hires.  They grind everything up, which contributes fuel for a prescribed burn, but it is necessary to come back and poison the resprouts from the undamaged buckthorn root systems.  On the other hand, our technique leaves much less fuel for a prescribed burn but kills the buckthorn the first time.  It will be interesting to see how fire carries through these areas if the DNR is successful at executing a prescribed burn here in 2015. 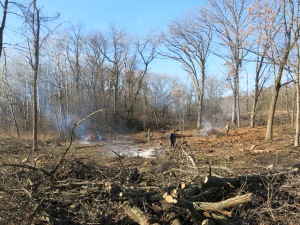 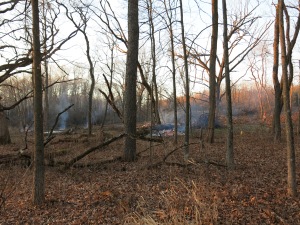 The conditions for burning brush piles are still very good, so I’m going to try to burn as much as I can before the snow finally arrives.  We got out again yesterday and continued on the west side of the wetland shown above, approaching The Buckthorn Alley. 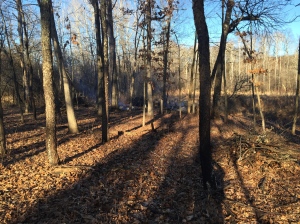 It was a cold day and the fires felt real good.  Andy, Chris and Austin standing before a huge blaze. 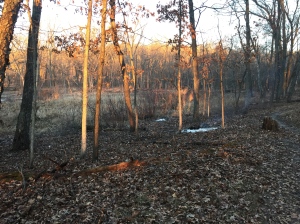 One of my favorite things to do is hang out by a fire on a cold winter’s night.  I propped myself up with a pitch fork and watched the smoke trailing up from the embers and through the trees into the moonlit sky.

Happy New Year and I hope to see you at The Springs!

3 thoughts on “Fire Works at The Springs”