It was a bit reminiscent of The Return of Tarzan when The Buckthorn Man returned to his Shangri-La on the shores of Ottawa Lake.

Like the buckthorn thickets of the kettle moraine are ‘a bit’ like the jungles of Africa, The Buckthorn Man is only ‘a bit’ as noble and virtuous as the mighty Tarzan.  Yes, yes, if only I could be as self-possessed as the king of the jungle, how liberating that would be.

Imitating the lord of the apes, I aspired to noble contemplation of ethics and aesthetics as I bent over the spotted knapweed on the sand prairie and listened to The Narrative of the Life of Frederick Douglas.  Sweet freedom.  Paradoxically, I do love my servitude to The Creator, which is my free choice to labor at The Springs, because it enables me to manifest my version of Aldo Leopold’s Land Ethic, and satisfy my desire to make the world a more beautiful place. 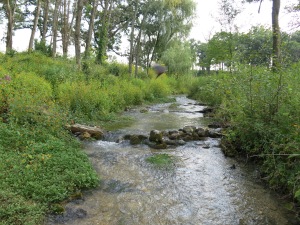 A land, ethic, then, reflects the existence of an ecological conscience, and this in turn reflects a conviction of individual responsibility for the health of the land.

Much of what he said resonated with me, but, and I hope you won’t think that The Buckthorn Man simply must have a buckthorn spike stuck in his butt to quibble with Aldo, like other careful readers, I found myself disconcerted by some of the things he said, or, as the case may be, did not say.  He fails to mention the highly evolved Seventh Generation Earth Ethics of the indigenous people, while hoping that “we”, homo sapiens (Latin: “wise man”), who violently and rapaciously “conquered” the land, have learned a lesson.

A nation spawned from empires built on the backs of slaves is not easily weaned from gluttonous exploitation.  Lest you think my ranting hyperbolic, consider this example from Donald Culross Peattie’s fine work,  A Natural History of Trees of Eastern and Central North America:

Until almost the turn of the present century (1900), pecans reached the market largely from wild trees.  The harvesting methods in early times consisted in nothing less heroic and criminal than cutting down gigantic specimens — the bigger the better — and setting boys to gather the nuts from the branches of the fallen giants.  It seemed to the pioneer then, as it did to every American, that the forests of this country were inexhaustible.  Thus it came about that the wild Pecan tree had become rare before men began to realize how much was lost.

Before I proceed with the riveting story of what happened when The Buckthorn Man returned to Shangri-La, I must complain about another, subtle perhaps, line of Leopoldian thought.  He espouses a moral relativism that positively rankles me: “An ethic, philosophically, is a differentiation of social from anti-social conduct.”, and later: “The mechanism of operation is the same for any ethic: social approbation for right actions: social disapproval for wrong actions.”  No Aldo, NO!  There is an objective difference between right and wrong, independent of the whims of society, which Mark Passio eloquently and passionately explains in his Natural Law Seminar.

If you have any doubts, please check with Fredrick Douglas.

I arrived at the Ottawa Lake campground on Friday, August 22, excited to setup camp at the walk-in site #335, only to find that it had been let to another party an hour earlier.  It reminded me of that scene where Jerry Seinfeld complained to the car rental company that knew how to take his reservation, but not how to hold it.  Undecided about what to do, I took a walk downstream in the Scuppernong River to inspect the work that was recently done to improve the channel.

Here are some views of the stretch of the river just upstream from the gaging station bridge that still need some channel remediation. 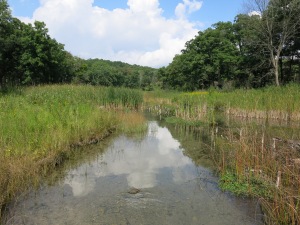 While wandering the trails I met Eliot and his son Isaiah, and they graciously invited me to stay with them at site #388, which is a beautiful site on the bluff overlooking Ottawa Lake.  Thanks again guys!

Saturday, Sunday, Monday, Thursday and Friday were dedicated to digging and pulling spotted knapweed on the sand prairie.  Most of the seed is still firmly attached and, since I did not mow the prairie this year, there is a ton of it. 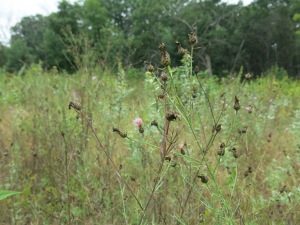 I didn’t care if it rained.

It was hot, humid and buggy, but beautiful nevertheless. 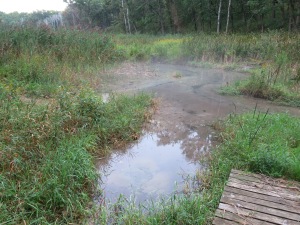 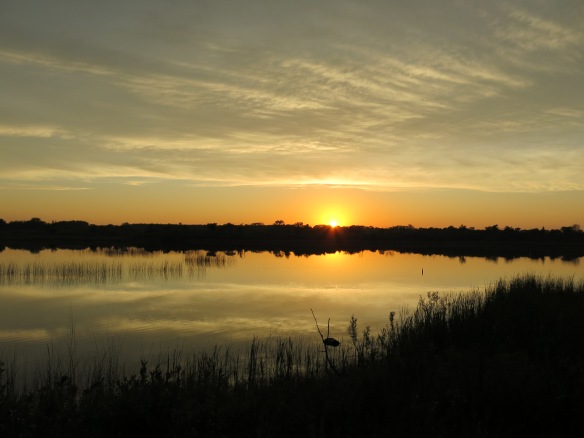 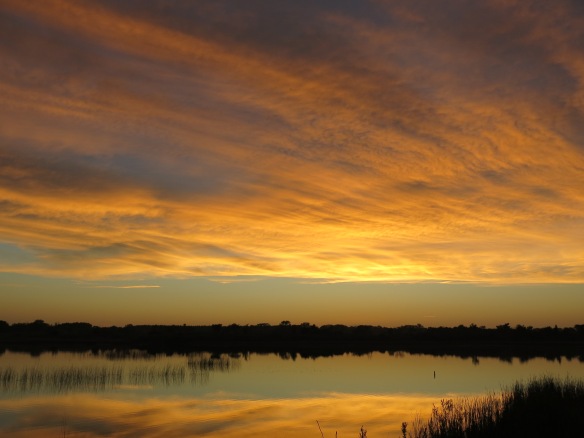 On Tuesday and Wednesday I was determined to finish clearing the buckthorn along the trail that follows the east shore of Ottawa Lake between site #380 and #335.  I was concerned about the bar oiling mechanism not working properly on my chainsaw and, sure enough, it was kaput.  So, I carried a little pint bottle of bar oil in my chaps and stopped every couple minutes to manually apply some lubrication to the bar and chain.  No problem! 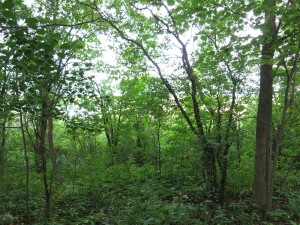 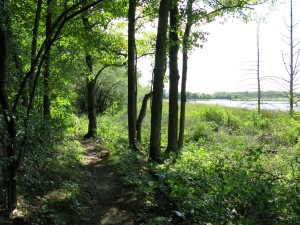 The sights and sounds of The Springs:

Buckthorn seedlings along the cut-off trail. 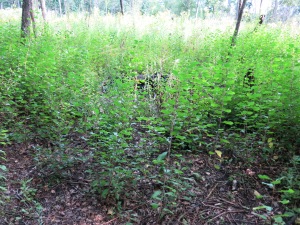 Giant thistles that I should have positively identified as friend or foe a few months ago.

The area of phragmites that I poisoned near the Emerald Spring deck is finally coming back to life. 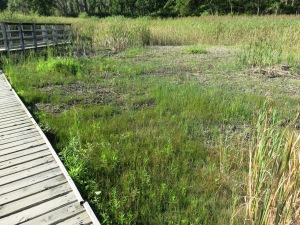 A beautiful, unidentified flower near the Hotel Spring.

The valley of the headwaters.

Wednesday morning and I had a date with buckthorn. 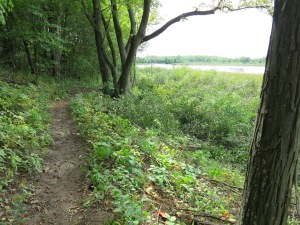 You can follow the lakeshore trail all the way from the beach to the north end of site #334 and enjoy wide open views of the lake and fen to the west the whole way.  It’s lovely. 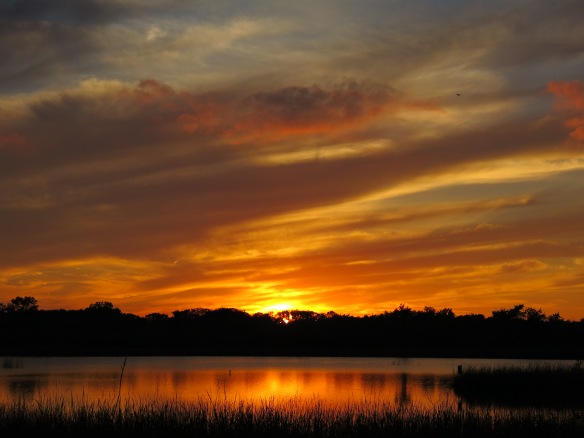 Thanks again to Carl Baumann, for splitting and restacking my stash of firewood!.

And thanks to Dave and Lindsay for coming out to visit; I really enjoyed it.  I had a couple of uninhibited and inspired guitar jams by the fire and, despite all the rain, never had to setup my tarp at camp.  It was excellent.