Like the headwaters of the river itself, efforts to restore the Scuppernong River to its natural state are gaining momentum.

Late last Fall the DNR Fisheries team, along with help from Southeast Wisconsin Trout Unlimited, installed bio-logs on the stretch of river between the old barn site and the gaging station bridge. 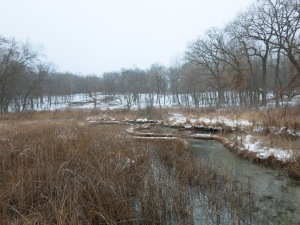 This Spring, we filled in the areas behind the bio-logs with brush inspired by the efforts of volunteers from Trinity United Methodist Church.

And recently, we rolled back the water cress… 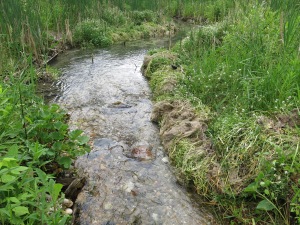 … and began removing the remaining structures from the flumes that once channeled the outflow from the Scuppernong Spring.

The last time we saw Ben Heussner, DNR Fisheries Biologist, at The Springs, I reviewed with him the fact that in most of the places where dams or levees previously blocked the river, it looked like not enough of the obstructing material was removed, which resulted in humps in the riverbed that caused silt and marl to collect upstream.  Ben agreed and commissioned an elevation survey of the river from the Scuppernong Spring all the way downstream to the Marl Pit Bridge. 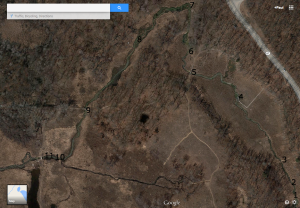 Ben assembled a team of DNR experts to do the job.

In locations where there was a noticeable hump in the riverbed, like points 2, 3, 5 and 10 marked on the river image above, they captured three GPS points: one at the “toe”, or point upstream where the hump started, one at the middle of the hump, and one at the “heel”, or point downstream where the hump ended.  Using the elevations from these three points and calculating the desired, or optimal slope, by incorporating all of the data point elevations, they will be able to determine how much material should be removed from the hump to allow the river to clear out the accumulated sediment.  Steve and Michelle explained that this doesn’t necessarily mean removing material from the river, it may be enough to simply spread the hump out beyond the “toe” and “heel”.

Lynette is the expert with the Trimble, GPS device and she made sure we accurately captured all the data points.  Back at the office, she will retrieve the exact elevations of each location and map them out.  There are simple and sophisticated ways to present the results depending on the questions asked, and I’m looking forward to the recommendations the DNR Fisheries Team comes up with.

Lynette and Michelle putting the trimble together. 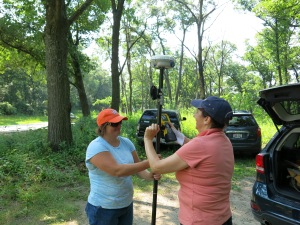 The device relies on a cell phone to upload the data and Lynette took a soaker for The State, to help Steve reinitialize the device at the Scuppernong Spring.

Steve “Gus” Gospodarek taking the measurement at the “heel” downstream of the bridge at location #3 shown above. 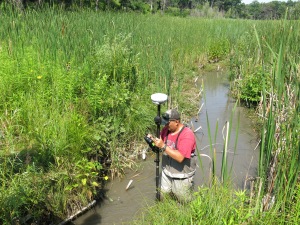 Capturing the data point at the Hotel Spring.

Big birds at the Big Bend. 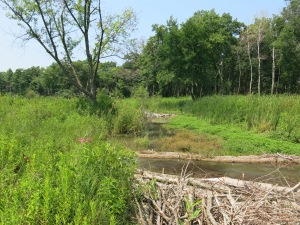 I was in heaven the whole time and thoroughly enjoyed the experience.  Steve taught me new words like thalweg …

… and oligotrophic.  Although the term oligotrophic (Lacking in plant nutrients and having a large amount of dissolved oxygen throughout) is normally applied to lakes, the concept can be extended to rivers as Steve used it to describe the Scuppernong River.

When the survey was done, Steve suggested we go back to forest headquarters and pick up a “jetter pump” to blast out the muck encasing the huge oak beams we discovered under the wreckage of the old flumes.  It was a pleasure to visit the Fishery Team’s storage facility and watch Steve, Andrew and Josh whip together a jetter pump rig.  Before you could say “brook trout”, we were back at the Scuppernong Spring blasting beams out of the muck.

I had so much fun…

We got three beams totally out and almost finished a fourth.  Josh suggested we leave a beam that we half excavated in place to create a bend in the channel — and so we did.  The views below are looking upstream from the first bridge below the Scuppernong Spring, where the flumes ended.

I have the jetter pump rig in my truck and hopefully we’ll be able to get the remaining beams out in the next few weeks.

It was an excellent day capped off when Pati, my African Queen, came out to join me and say goodbye to the Scuppernong Springs before she embarks for South Africa again. 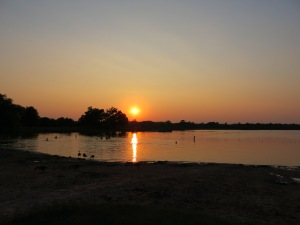 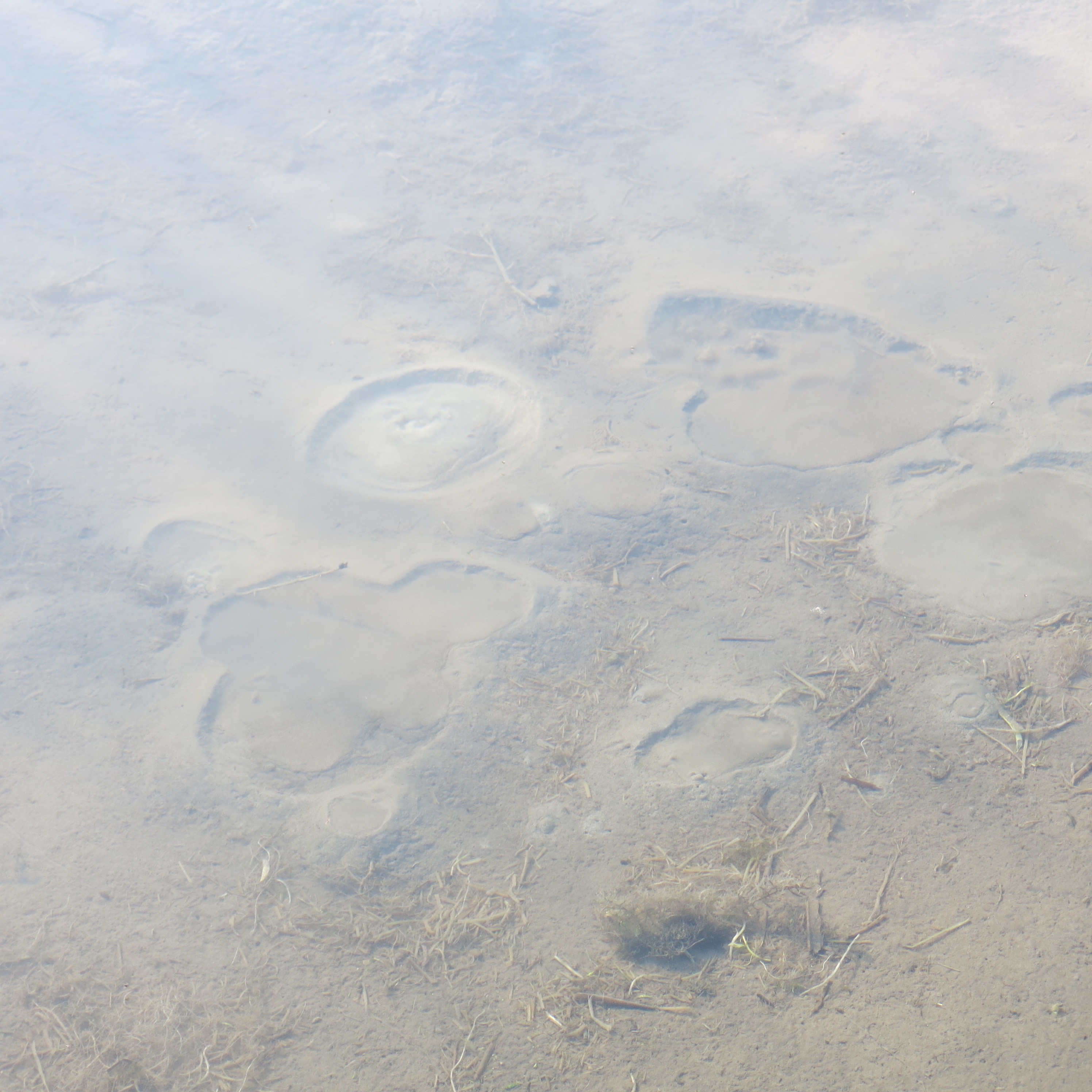