I didn’t sleep at all last night; I couldn’t stop my mind from trying to unravel the mystery that I had experienced.  Pati always encourages me to tell my “Santa Story”, which I got from reading Astrotheology and Shamanism Christianity’s Pagan Roots by Jan Irvin and Andrew Rutajit, and that is a good place to start to describe my “trip”.

The Amanita Muscaria mushroom grows in northern climates under fir, aspen, or birch trees. Pati and I found huge patches of it on Grand Island in Lake Superior and I even found one at the Indian Spring. The shamans in northern Europe watched the reindeer and noticed how much they loved this mushroom. They saw that, even more than the mushroom, the reindeer loved the urine that they, or their mushroom loving brothers, relieved themselves of. The shamans experimented and came to understand the dramatic effects this mushroom could induce (especially when un-metabolized mucimol, excreted via urine, was consumed.)

In the spring, the shamans would enlist the help of children to identify where the white caps of the mushroom were pushing through the warming soil — kind of like an Easter egg hunt. As the mushroom develops it expands through the white cap under which it was born leaving the characteristic snow fleck pattern that remains on the surface of the bright red or sunburst colored mature mushrooms.

When they were ready, the shaman harvested the mushrooms and hung them on the bows of pine trees to dry them in the short summer sun — like Christmas ornaments. As winter set in, and the entrances to the yurts the people lived in became blocked by snow, the only way to enter was through the smoke hole, or chimney. The shaman would travel from yurt to yurt carrying a sack of Amanita Muscaria mushrooms on his back.  As he delivered his gifts, he recommended that they hang them over their fireplace mantels to finish drying them out — like you would a wet pair of stockings.

Over the period of the winter solstice many of the people would consume the mushrooms under the guidance of the shaman and travel in time and space experiencing their consciousness in remarkable ways. When thoroughly intoxicated with muscimol, the active ingredient in the Amanita Muscaria mushroom, the person would “leave” their physical body and experience their consciousness in pure spirit form.  This was valued as it informed their reasons for living and prepared them for their own deaths.

That story resonated with me deeply and I knew I had to experience it. I found an excellent source for the mushrooms and tried to brew them in a tea, which I had heard was the way to go. It might be for some, but I was not ready for the experience; I was still drinking way too much whiskey and smoking cigarettes.  The first time I tried them, I was camped at the Hartland Marsh and spent the night shivering in my sweat drenched sleeping bag. I understood then that I need to detoxify my body and my mind if I hoped to commune with A. Muscaria. That was back in the fall of 2009 and I tried two more times in the interval and could not break through. My bout with a cancerous tumor in my neck in 2011 was the wake up call I needed to cleanse my mind and body.

Yes, I couldn’t sleep last night.  I was still coming down from my ride with Santa the night before, and trying to recall the sequence of events as my consciousness left my body and I began to travel as a spirit through space and time, finally returning after a 16 hour “trip”.  I began by chopping 4 ounces of mushrooms in the blender and preparing a mixture of apples, carrots, lemons, limes and oranges by pushing them through my juicer. I started Friday morning, December 27, at around 8:15am, with 3 heaping tablespoons of mushrooms mixed with enough of the juiced fruits and carrots to make it palatable, held my nose, and woofed it down.  I ingested more “shrooms” approximately every hour, resting or doing gentle yoga asanas between each dose, until finally, around 2:30pm, after puking twice, drinking a cup and a half of urine, and consuming all of the shrooms, I departed this realm (Much of the muscimol, the physco-active ingredient in Amanita Muscaria, is not absorbed by the body in the first pass and leaves via the urine, hence the necessity to capture and drink it.   Urine therapies go way back in the Vedic tradition.)  But, just as I was leaving, I thought of those I love, especially Pati. I thought she might be at the bedside worried about me, and I reached out to her to say goodbye only to remember that she would not be back home for another week.

I traveled at a speed beyond comprehension and soon found myself in an infinitely vast space on the rim of what appeared to be a giant wheel that spanned the Universe.  Perhaps it was an incarnation of the wheel of karma — the wheel that the Buddha often referred too — manifested from my subconscious.  It is hard to describe “where” I was i.e. from what perspective I was on the wheel, but I could see it clearly extending in both directions. Via unspoken words I was offered the choice: did I want to return to life in a physical body or continue as spirit? I didn’t get a chance to say goodbye to Pati and I couldn’t just leave her like that, so the choice to return for me was easy. 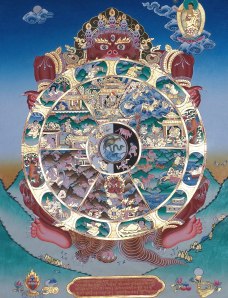 I continued on and unexpectedly was given another choice; did I want to go to God? Yes! Yes! my spirit emphatically declared and I proceeded to somewhere above the wheel and as I approached what I thought was God, I heard the mournful lamentations of the spirits, “they’ve done it, they’ve blown up earth!”. I quickly passed by, or through, or rebounded past “God”, I don’t know which, but I was traveling fast and deeply into space and matter until I could see the atoms passing by. I distinctly remember becoming aware of the binary concept. And then I heard the click of off, on, off, on, off, on, off, on, off, on and suddenly, with what I assume was an “ON”, a big bang, and I began the journey back.

When I returned to the wheel I distinctly remember the voices of the spirits there contemplating if they, like roulette balls, should drop back into “the game”. They struggled with the gamble of their destiny in a physical manifestation. I noticed an incessant clicking sound which reminded me of the on, off, on, off, ON click or the sound of the balls ricocheting around the roulette wheel. I had made my choice and did not attempt to drop my ball in just anywhere, but I felt like I could still have changed my mind during that brief time on the rim of the wheel.

The next thing I became aware of on my headlong race back to the present moment was seeing an accident on a bridge over a river. I looked into the eyes of the lead horse, who was laying near the crumpled wreck of the wagon it was pulling, and I recalled Mark Twain’s characterization of life in 600AD as described in A Connecticut Yankee In King Aurthur’s Court, where he explained that if you were in a hurry, you would not hesitate to “kill the horses” to get where you wanted to go. And the horse explained to me that he couldn’t go on anymore, he was exhausted. “It wasn’t my fault”!

The bridge had caught fire and the people were dismantling the wreckage as I left the scene. The next thing I remember was a disembodied voice whispering to me “Sir Knight, Sir Knight…” and my conscious awareness returned to my body. I needed to relief my bladder, I checked the time and saw it was 5:20am, Saturday morning, but I knew I had not come all the way back. I laid down again and continued my journey and, amazingly, I saw the smiling face of Ben Johnson, who has been helping me recently at The Springs, and I knew I was back.

It took me a while to get going and my heart was set on being at The Springs. I walked from the parking lot on Hwy ZZ to the hotel spring to get some water, which I needed badly. 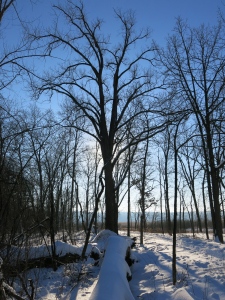 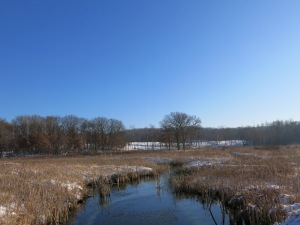 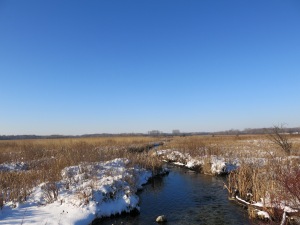 (I noticed upon review that I said I was on the east side of the cut-off trail at the beginning of the video. I was actually on the northeast side of the main loop trail that leads to the buckthorn alley.)

It was so good to see Jim Davee at the work site when I arrived. He listened to my tale and I felt like he did not judge me. In my haste to get to The Springs, I left my chainsaw chaps at home (they were hanging to dry in the basement) and when I expressed my fear of cutting without this protection, Jim immediately offered to go to Forest Headquarters and get a pair of chaps for me. His thoughtfulness almost reduced me to blubbering tears. He found Anne Korman, the Assistant Superintendent of the Southern Unit of the State Forest, and soon was on his way back with a pair of chaps. Thanks Jim and Anne!

Here is what the area looked like before we started working; me cutting and Jim piling. 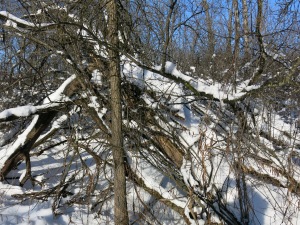 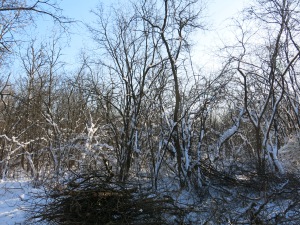 As soon as I began working on the North side of the trail, where Ben Johnson left off, I realized that I had asked him to work in what was one of the worst tangled messes I had ever encountered; and it was his first time cutting buckthorn with a chainsaw! Sorry about that Ben.

Zach Kastern and I were trying to hook up at The Springs, and our schedules didn’t align exactly, but he made the effort to come out and arrived around 2:00pm. He asked where I wanted to focus and I suggested we try to carve a whole in the buckthorn in a southeasterly direction to reveal the old cranberry bog on the other side. That seemed like a good plan and we got after it. 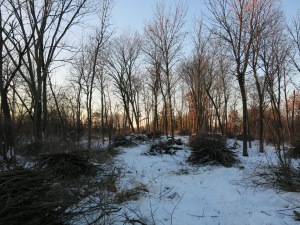 This is a view looking toward the “Blue V” on the edge of the horizon that we oriented ourselves to as we carved out a channel.

We quit just before sunset and I was really looking forward to taking a tour with Zach. Jim went home to get some information about the Clover Valley spring, which is very near Rice Lake and the Whitewater Lake Recreation Area, and he arrived just in time to take a walk with us. We had a wonderful conversation as we traded ideas and information; it was memorable. 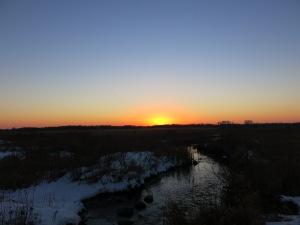 And remember… “He sees you when your sleeping, he knows when you’re awake…”

8 thoughts on “The Shaman Santa”