It took me two years working at The Springs to get my courage up to tackle the Buckthorn Alley.  Or, maybe it was that I was focused on what I thought were the more scenic parts of the Scuppernong Springs Nature Trail that caused the delay. I avoided even walking this section of trail, but, as is typically the case, ignoring the problem did not make it go away.

In April 2013 I made a start at it, but the weeds of summer came early and I discovered the advantages of following their phenology to identify the best ways and times to attack them. Finally, in late November 2013, I returned to the Buckthorn Alley with Ben Johnson, Andy Buchta, Dick Jenks, Jim Davee and Zach Kastern determined to change the status quo. Now, after 3 months of consistent, team effort, we have finally, reminiscent of our efforts on the “Lost Trail” in the fall of 2012, broken through to the other side.

When I arrived yesterday, it was really great to see that Andy Buchta had piled all of the buckthorn that I cut the last time out, and the table was set for me to get right to work.

The end of the Buckthorn Alley in sight. 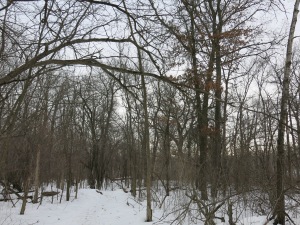 This long, cold, winter season has been perfect for working in this very wet, marshy area. I’m not going to cut anymore along the trail here for now and will focus, while the snow cover lasts, on piling and burning what has already been cut. So, here are the final results along the buckthorn alley for this season. In the fall, we’ll work on the north side of the trail to reveal the oak groves there. 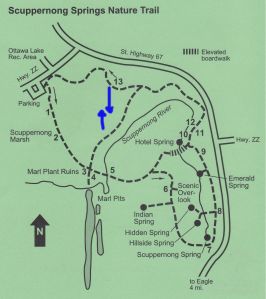 Here are a couple of views of late winter at The Springs. 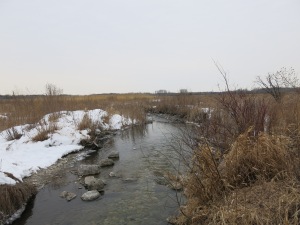 And the fire that warmed me all day.